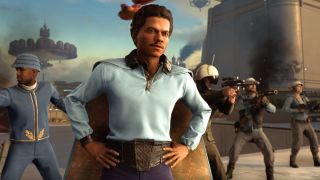 If you play Star Wars Battlefront but haven't bought the Bespin DLC, you can give it a go for free this weekend. From today through Sunday, August 21, all five of the multiplayer expansion pack's new maps and the Sabotage mode will be yours to try, as will its hero characters Lando Calrissian and Dengar. Yes, Lando is a Rebel, even though he kinda betrayed his buddy Han when we last saw Cloud City in The Empire Strikes Back.

Previous free DLC weekends have let players try out everything except for their respective expansion's unlockable weapons and Star Cards, so that's likely the case here as well. It would stink to put all that effort into unlocking one and then not be able to use it once the free weekend is over, I guess. Another free Bespin trial event will go from September 12 through 18.

EA and DICE plan to release two more expansion packs before putting the Star Wars Battlefront Season Pass to bed: the Death Star expansion in September, and the Rogue One: Scarif DLC in December.