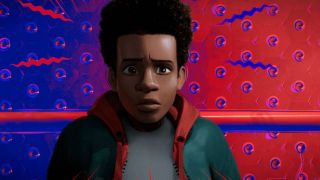 Several key scenes from the excellent Spider-Man: Into the Spider-Verse have been replicated in live-action TikTok videos by a very talented teen and his family. The attention to detail, acting, and effort that's evident in these clips earned Tiktokker Jenoah Bush a retweet and emoji round-of-applause from Into the Spider-Verse writer and producer Phil Lord.

Bush's creative endeavor picked up viral social media traction when his videos began appearing on Twitter, like this one recreating a scene from early in the movie:

Have you folks seen the kid on TikTok that's recreating scenes from INTO THE SPIDERVERSE with his parents because it's my new favorite thing, they're so cute and creative pic.twitter.com/RaW63OYhyoJanuary 23, 2020

… And this one, showing Miles Morales being driven to school by his police officer dad:

I mean look at this! The talent! The attention to detail! pic.twitter.com/eqDy6z51MHJanuary 23, 2020

As you can see, the scenes are near-identical to the source work and masterfully portrayed by everyone involved. The best part is, Bush has been inspired by the outpouring of support enough to commit to even more Spider-Man recreations. The young creator took to Tiktok to reveal his plans for more videos of the same ilk, calling for actors in the Lilburn, Georgia area to participate as extras.

Watching these clips not only put a big stupid smile on my face, but also reminded me how great Into the Spider-Verse is and made the long wait for the 2022 sequel that much easier. Cheers, Jenoah. Please make more.

Let's face it, 2022 is a ways away. So here are the most exciting upcoming movies of 2020 to look forward to in the meantime.