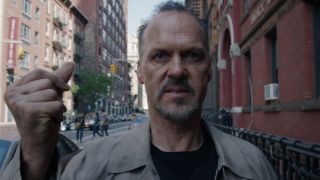 This is your friendly spoiler warning. Click away if you've not seen Captain America: Civil War and wish to know nothing about Spider-Man: Homecoming.

You may recall a month ago when Michael Keaton was up for the role of Spider-Man: Homecoming's villain... and then a week later when he wasn't. Well, history repeats itself today as Variety reports that Keaton is back in the mix for the role and that final negotiations have begun. THR's story adds that the deal is done, and he's locked in for the part. All we need now is the official press release from Marvel. If this bunch of stories are true *fingers crossed* then Keaton will be stepping up to play Spidey's main nemesis.

Along with Keaton's return, there's some rumored info on who that dastardly person might be. It was reported that he was lined up to play The Vulture, and sources over at JoBlo back that up. The site reports that not only will Keaton be playing The Vulture, but he'll be joined in his mission to wreak havoc on New York City by The Tinkerer. You gotta love that name.

But wait, there's more! To sync the events of Spider-Man: Homecoming with the Marvel Cinematic Universe, apparently The Tinkerer will help the Vulture construct a fancy new suit that's crafted from salvaged Chitauri tech left in the wreckage from The Avengers' Battle of New York. Pretty cool, eh? With Robert Downey Jr.'s Tony Stark returning to mentor the young superhero, this flick's shaping up to be a perfect bridge between Sony and Marvel's comic book worlds.

Speaking of Iron Man, it looks like that cheeky post-credits scene where we saw Peter Parker toying around with his Spidey signal was just the beginning. JoBlo adds that Stark's extra modifications to Parker's costume include the web wings made popular during his early comic book years. Oh yes; we'll get to see Spider-Man fly.