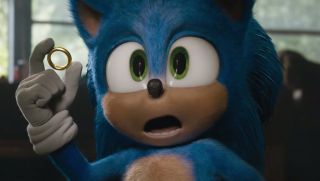 You knew it was coming. Yes, there’s a Sonic movie post-credits scene – so don’t (spin) dash out of the cinema once the film ends and the credits start to roll.

Not only is there a well-measured tribute to the blue blur’s 16-bit legacy, but the Sonic after-credits also helps set up a sequel by introducing... we won't say any more, but head on down below for a detailed explanation of what the Sonic movie post-credits scenes mean.

How many Sonic post-credits scenes are there?

Technically one, though there is a brief animated sequence after the film has finished that is well worth sticking around for regardless. In the style of the Genesis/Mega Drive games, Sonic speeds through the events of the movie’s plot, including a look at his tussles with Jim Carrey’s Robotnik, as well as other set-pieces in the movie. Sonic fans will be pleasantly surprised at just how much detail was put into it.

What happens in the Sonic post-credits scene?

Then, the real deal: as the Sonic movie post-credits scene plays, we’re treated to a shot overlooking Green Hills, Montana, the setting for much of the movie’s runtime. Suddenly, a creature arrives on Earth via ring portal: It’s Tails!

Miles “Tails” Prower (still the best pun ever, don’t @ me), isn’t just here for a spot of fan service, though. He’s using a tracking device and delivers some exposition that’s bound to set up a sequel: “If the readings are accurate” then he’s close by, he says – presumably meaning Sonic. Tails flies off towards Greens Hills and it cuts to black. Then the credits start to roll. You’re safe to go home without missing anything else.

So, what does it all mean? Perhaps it’s best to not think too hard about this one, lest you fall into a plot hole. After all, Sonic left his home planet as a young child and Tails was nowhere to be seen. Has the flying fox really spent a decade tracking him? Why? How? Wouldn’t you just know it, those answers (and more) have been potentially left open for a sequel… Expect a Sonic and Tails team-up then against whichever foes dare oppose them.