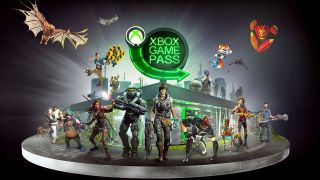 For those who haven't tried Xbox's games-on-demand service yet, this cheap Xbox Game Pass deal is absolutely worth taking note of. Amazon is currently offering three months of Xbox Game Pass Ultimate with three extra months free, all at a thoroughly reasonable £32.99.

That's a significant saving - six months for 30-odd quid less than normal. Because you're also getting the 'Ultimate' version with access to Xbox Live Gold, over 100 Xbox One titles, and a good number of PC games, it's excellent value for money all round - a bargain by any other name. That means you can play games like The Outer Worlds, Rage 2, and Gears 5 for much less than you'd pay if you picked up the discs themselves. And remember, Game Pass membership stacks - it doesn't matter if you already have a subscription, the new six months will just be added on top.

Xbox Game Pass Ultimate (3 months) + 3 extra months | £32.99 on Amazon (save £32.99)
Game Pass is undoubtedly one of the best things Xbox has done in the last few years, so getting six months at 50% less is a steal. This can also be stacked on top of an existing membership.View Deal

If you're new to the idea, Xbox Game Pass is a bit like Netflix for gaming - you pay a flat subscription fee and gain access to 100+ games you can download and play so long as you've got an active membership (which isn't much of a burden when you can grab a cheap Xbox Game Pass deal like this fairly regularly) Because every Xbox One exclusive is available there from day of release, not to mention a host of other brilliant titles, there's more than enough to keep you busy. Want the full Halo experience or to try older classics like the Fable series? This is the place to do it. It's always being updated, too, so you'll never run out of things to play.

For more offers, don't forget to check out these Xbox Live Gold deals. We've also included the best of the rest on the internet when it comes to Xbox Game Pass below. These are regularly updated, so the most recent offers can be found there.