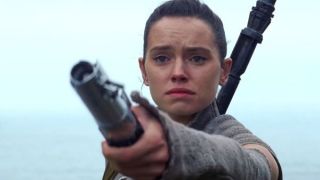 It's gratifying to see familiar characters like Luke Skywalker and Darth Vader pop up in new Star Wars films, but the series has to move firmly into its own territory at some point. Gary Whitta, the original writer for Star Wars: Rogue One, told ComingSoon.net that it's important for the series to not become fixated on recreating old glories.

"One of the thing things we really want to do at Lucasfilm is create a universe and not keep relying on old legacy characters," Whitta said. "We’ve got Rey and Finn and Kylo Ren, they’ve already introduced a new generation of characters. Whatever kind of Star Wars films they’re making 10 or 20 years from now, I don’t think they’re going to be relying on the same legacy story elements as we have in the past."

Whitta added that he's "speaking purely as a fan" here since he did his part for Rogue One and isn't further involved in Star Wars (in any capacity he can publicly admit, anyway). But it "makes sense to [him] that you don’t want to keep telling the same story over and over again. You want to tell new stories".

Rogue One's story was already "90 percent" of the way there, given its emphasis on all-new characters and worlds, Whitta noted. The next film after that will be Star Wars: The Last Jedi in December 2017, which will presumably spend quite a bit of time with Luke Skywalker. Then it's the Han Solo movie in May 2018, which will show a new side of old characters like Han and Lando. By the time Star Wars 9 rolls around in 2019, will the series be ready to fully step out of the original trilogy's shadow? We'll have to wait and see.