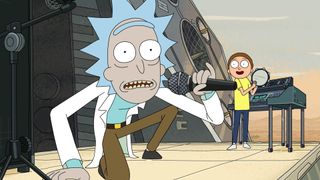 Well, this is up there with any of Morty’s Mind Blowers. Nearly two years after Rick and Morty season 3 ended, we finally have a confirmed Rick and Morty season 4 episode count ahead of its panel as part of the San Diego Comic Con 2019 schedule. Not only that, but the show’s creators have also revealed a shortlist of guest stars, including one of the MCU’s most famous, and colourful, personalities. Spoiler: He’s made of rocks.

Speaking to EW, Dan Harmon and Justin Roiland confirmed that “This new season will be 10 [episodes],” which is the same amount of both season 2 and 3, though the first season still leads the way with its 11-episode run. That’ll bring the series to *counts on fingers* 41 episodes in total, with another 60 episodes still in the pipeline across the next several years.

But it’s not just going to be Rick, Morty, Summer, and the rest of the intergalactic supporting cast that makes up the madcap animated comedy, along for the ride. Let’s talk guest stars.

The likes of Keith David, Keegan Michael-Key, and John Oliver have all turned up in the past in one-off roles. The Rick and Morty season 4 guest stars list, according to Justin Roiland, includes Paul Giamatti, Sam Neill, Kathleen Turner, and Taikia flippin’ Waititi. Oh, yes.

Waititi, of course, is lined up to direct Thor 4 – and also has some voice acting work under his belt in the MCU, having played Korg in both Thor: Ragnarok and Avengers: Endgame, as well as starring as droid IH-88 in the upcoming Star Wars Mandalorian TV show. No word yet if he and fellow New Zealander Sam Neill will be playing Just Two Regular Kiwi Brothers Running in a Van From An Asteroid and All Sorts of Things, though.

Alongside some new guest stars, Harmon and Roiland have teased the return of one of Rick and Morty’s wild and wonderful cast of trademark one-shot characters. Harmon said, “There’s going to be a couple Meeseeks popping up here and there,” though co-creator Roiland is adamant these sorts of returns won’t be without a good reason, “If we came up with an idea to bring back a character and it was a clever idea, we’d do it.”

10 episodes filled with Meeseeks, Taika Waititi, and who knows what else? Welp. Rick and Morty season 4 is going to be a hell of a ride when it launches later this year.

Here are some of the best new TV shows of 2019 - with plenty more still to come.