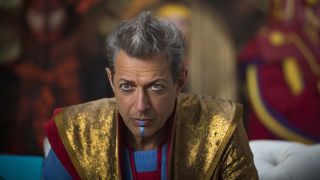 Before the thumping trailers and immediately iconic jokes, Marvel promoted Thor: Ragnarok with a simple pair of videos showing what Thor was up to during Captain America: Civil War. Turns out he was living in Australia with everyday office worker, Daryl. These shorts were an instant success, and it's too bad that we only got two of them. Oh, what's that? Jeff Goldblum says there's another one? Starring him and Daryl? Yes please.

Speaking to the Radio Times, Goldblum said, "So what happens [after the events of Thor: Ragnarok]? Well, I could go anywhere - I might knock on your door, and say hello. Guess who’s here? I shot a thing with Taika, where there’s a roommate in Australia. I show up at his, and I do knock on his door. And I take up residence in the little flat, as they say here. That’s what I do. And order things from the takeaway restaurant. Buy all the local foods."

While personally I'd pay good money to see The Grandmaster and Daryl traversing the outback and cosmos together, just because the scene was shot doesn't mean we'll get to see it soon or possibly ever. It could've been filmed for an unused post-credits scene that got left on the cutting room floor, or perhaps director Taika Waititi is saving it for the home release. So feel free to get your hopes up, but also keep in mind they're just that: hopes.

To get more of your daily recommended dosage of Goldblum, be sure to watch our interview, where the actor sings his own version of the Jurassic Park theme and gives an impression of a dolphin.