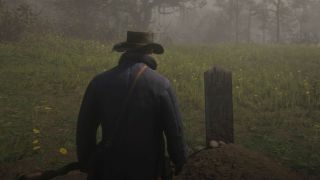 There are plenty of challenges to complete as you work your way through the game, but if you've read through the compendium listing for them you might be wondering what the various Unknown Collectibles are. As you progress through the story in Red Dead Redemption 2 the identities of most of them will be divulged as you discover them, however there is one that remains a mystery until the end of the campaign – a set of Red Dead Redemption 2 graves!

As with any good Western epic, there are certain characters who are going to be lost before the final credits roll, and in order to reach that sought after 100% completion stat you'll need to pay respects to all of them. To get this done, we'll show you how to locate the graves of every fallen comrade, so you can work your way down that checklist and tick them all off. Here’s where to find all of the important Red Dead Redemption 2 graves.

Naturally this guide is chock full of SPOILERS, so if you haven't finished the story yet then why not go hunting some Red Dead Redemption 2 legendary animals instead with our guide or the video walkthrough below:

Let’s kick the list off with everybody’s favourite Irish cowboy. Sean McGuire is a fast-talking mischief maker who meets an untimely end during an ambush by the Grays in Rhodes town centre. His charm and clever wit live on at his final resting place, which is northwest of Rhodes, directly west of Southfield Flats in a small outcrop overlooking the water.

Meek turncoat Kieran Duffy was a hostage that the Van Der Linde Gang started to warm to, but it wasn’t long before he was shuffled off of this mortal coil after being captured by his old gang, the O’Driscolls. You can find his unremarkable grave in between Shady Belle and the ruins of Bolger Glade.

Oh Jenny, we hardly knew ye. Ms. Kirk is injured during the escape from the botched ferry job that preceded the events of Red Dead Redemption 2, and succumbs to her ailments before the gang reach Colter. You can find Jenny’s grave north of the Colter hideout to the northwest end of the map, above the ‘e’ in Spider Gorge amidst the mist and snow.

Davey Callander is another character missing from the events of the main game. He is shot during the Blackwater job and succumbs to his injury as the gang approach the Colter hideout. Davey’s grave is situated just left of the ‘C’ in Colter on the world map, his small wooden plank monument sticking out above the snow behind another set of gravestones.

Eagle Flies is the charismatic Native American leader that Arthur and the gang become acquainted with during the campaign. He is fatally shot by Colonel Favours during the crescendo of the story. You can find his grave just off the road between Bacchus Bridge and Wapiti Indian Reservation.

Dutch’s right-hand-man, Hosea is taken out by antagonist Agent Milton in a shocking turn during the gang’s attempts to rob a bank in Saint Denis. You can find his grave in Lemoyne, directly east of Lagras.

Lenny is another character Arthur warms to during the events of the game, but is also sadly lost during the foiled Saint Denis heist. His grave is situated right next to Hosea’s in the Lemoyne marshlands.

Susan is a welcoming force in the Van Der Linde Gang who helps Arthur and the rest of the cohort settle in as the campsite changes location. Ms. Grimshaw is brutally shot by Micah late in the game. You can find her grave southwest of Elysian Pool on top of a hill.

Easily the most important gravestone to pay your respects to, Red Dead Redemption 2’s protagonist Arthur Morgan succumbs to Tuberculosis at the conclusion of Red Dead Redemption 2 after securing the safety of the Marston family. You can find his grave east of Bacchus Bridge, overlooking a gorgeous vista - a fitting final resting place.