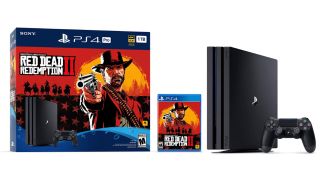 You can be damn sure to see some of the best PS4 bundle deals show up as part of the Amazon Prime Day game deals, and we think we've come across one of the best of the bunch so far, particularly if you're a UK customer.

Right now, Amazon UK is offering its PS4 Pro 1TB Red Dead Redemption 2 bundle for just £299.99, down £50 from its usual RRP of £350. That gets you a beefed up version of the greatest console on the market right now, alongside a copy of Red Dead Redemption 2, Rockstar's western opus which also happens to be one of the best games of 2018.

Get a 14% discount on this easily justifiable PS4 Pro bundle deal, which will keep you busy all the way up to the release of PS5View Deal

This deal will only last while Amazon Prime Day is still live, which technically ends later today at midnight, so hurry and lock in an order if you're interested. Red Dead Redemption 2 can easily eat up hundred of hours of your free time, so just be prepared to say goodbye to your social life as you know it.

You probably missed this one, but don't forget that there will be Black Friday PS4 offers starting in November.