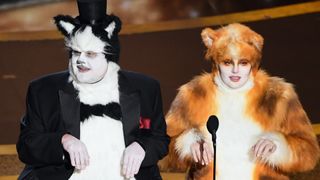 It wasn't a great movie, but at least the cast of Cats is embracing the weirdness that was last year's most bizarre film.

James Corden and Rebel Wilson, who played Bustopher Jones and Jennyanydots the Gumbie Cat, respectively, presented the 2020 Oscar for Best Visual Effects to 1917. But they did it while dressed as their Cats characters.

Just before announcing the winner, which included The Lion King, Avengers: Endgame, Star Wars: The Rise of Skywalker, and The Irishman, Corden and Wilson reminded the audience that they are both well aware of the importance of visual effects. Cue laughter from those in attendance, as well as countless others at home, as we all know the Cats graphics are universally regarded as the stuff of nightmares.

As both a human woman and the owner of a cat, I can't stress enough how uncomfortable the cats in Cats made me. However, I also can't help but smile and appreciate Corden and Wilson's ability to laugh at the film – it's a level of humility rarely seen in Hollywood.

It's important to note the circumstances under which 1917 won Best Visual Effects – the film relied heavily on visual effects to smoothly transition from scene to scene, as it was edited to looks as if it was shot entirely in one take. It beat out a fairly impressive line-up of films, including The Irishman (which used extensive visual effects to de-age actors like Robert Deniro, Al Pacino, and Joe Pesci) as well as Avengers: Endgame, which turned Mark Ruffalo into a dorky Hulk,