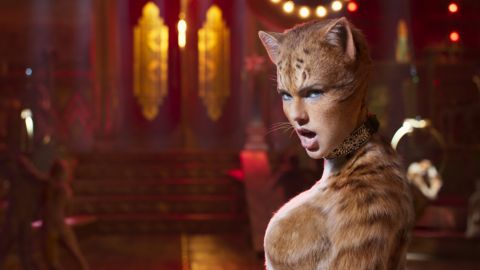 A lot of talented people have done their utmost to make Hooper’s vision succeed. Sadly, it doesn’t.

Even back when it was a hit West End mewsical, Cats existed in an uncanny valley between emotive anthropomorphic fantasy and cutesy costumed kitsch. That valley becomes a canyon with the addition of CGI motion capture in Tom Hooper’s film adaptation, in which a host of familiar faces (plus some refreshingly unfamiliar ones) are transmogrified into human-hairball hybrids with twitchy ears, priapic tails and bizarrely inconsistent accoutrements.

Why, for example, are Francesca Hayward’s abandoned albino Victoria and Idris Elba’s cat-napping criminal Macavity – just two of the critters hoping to be granted another life by Judi Dench’s Old Deuteronomy – effectively rendered naked, when other denizens of their nocturnal London underworld wear trainers, spats and trousers? Answer that one and you might be able to explain why Rebel Wilson’s Jennyanydots has an outer layer she can un-zip like a shell-suit when she’s not disconcertingly scratching her inner thighs and demanding entertainment from the bugs and mice she lives with.

Equally hard to fathom is why the moggies’ dimensions in relation to their surroundings shift from scene to scene and why more wasn’t done to make the loquacious lyrics – derived from TS Eliot’s playful pussy poetry – even moderately comprehensible. Cats, in short, is a weird mind-scrambler of a film whose eye-frying visuals and downbeat tone are constantly at odds with Andrew Lloyd Webber’s exuberant melodies.

Hayward, to be fair, is a charming newbie whose balletic pirouettes effortlessly transcend the pixelry around her and whose halting delivery of new number "Beautiful Ghosts" is infinitely more moving than Jennifer Hudson’s tear-drenched rendition of "Memory".

The scene where Victoria goes cat-burgling with Mungojerrie and Rumpleteazer is another unexpected delight, as is Taylor Swift’s showstopping turn as the catnip-sprinkling (if strangely English-accented) Bombalurina. Moments like these have enough artistry, zest and lightness of touch to beguile younger punters who will probably be more accepting of Hooper’s audacious aesthetic. Older audiences, alas, may not be feline so generous.

Cats review: "A weird mind-scrambler of a movie"

A lot of talented people have done their utmost to make Hooper’s vision succeed. Sadly, it doesn’t.