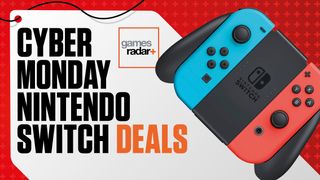 Even with the days themselves gone from the calendar, you'll have to believe us when we say: trust us, there are still Nintendo Switch Cyber Week deals available. Despite the bombast and madness of Black Friday and Cyber Week now in the past, you can still snag some awesome Cyber Monday Week deals, so quit hesitating! While the whole sales period may come across as daunting - particularly as the 'more traditional' Black Friday has spawned a whole fortnight's worth of Cyber Week deals and craziness - there's still opportunities for you to capitalise on offerings from retailers on items like the original Nintendo Switch, Nintendo Switch Lite, and accessories. We've compiled the best deals from the far reaches of the web for you to snatch up faster than Mario runs after he gets a Super Star.

Even if you already own a Nintendo Switch, there are still deals and savings to be had, including every Cyber Week Nintendo Switch game deal and, obviously the best Pokemon Sword and Shield Cyber Week deals. Given that Nintendo products are renowned for holding their value, they do so because of their quality, and so getting any slim discount is still a great way to get bang for your buck. For example, Pokemon Sword and Shield is still a fairly new game, but we've seen it with a few quid off here and there so snagging any discount on it is a huge opportunity. We're also combing the web for the best deals on Nintendo Switch accessories to help keep your device safe or looking fly. Basically, if you're after a Nintendo Switch Cyber Week deal of any kind, we've got you covered.

Nintendo Switch + Nintendo Labo + Lego Jurassic World + Carry Case | £299.99 (save up to £83.97)
This mega Switch bundle lets you choose your Nintendo Labo pack, so you can get crafty with whatever cardboard kit you prefer.

Since the Nintendo Switch Lite made its debut only this year, there's a whole hoist of extra Switch goodies on the market. If you haven't made up your mind on the handheld consoles then we've laid out the pros and cons of each for you in our guide to Nintendo Switch vs Nintendo Switch Lite. Take a gander at that page to figure out which device is worth your hard-earned cash and help you decide which deal is worth the most to you. But remember to act fast, as the day draws to a close the Cyber Week Nintendo Switch deals are ending, selling out, or otherwise disappearing, so keep your eyes on this page as we'll regularly update it.

Nintendo Switch + Mario Kart 8 | £251.99 at Nintendo (save £28 on list)
Head over to the Official store and get our exclusive Catalogue. Inside is a code for 10% off, which you can apply to your purchase of a Switch from the official store. Boom - £28 saved!
View Deal

Nintendo Switch Lite + Pokemon Sword | £248.98 at Amazon This is one of the cheaper Switch deals we've seen, but you could always swap Sword with Shield for £248 if you'd prefer.View Deal

Nintendo Switch Lite (Turquoise) + Mario Kart 8 Deluxe + 6-month Spotify Premium | £219 at Currys (save £20.99)
This lighter, handheld-only version of the Switch is one hell of a lot cheaper. Also available in Yellow.View Deal

64GB SanDisk SD card | £14.90 on Amazon (save 32%)
The only drawback of the Switch is its surprisingly low internal memory - it's only got 32GB. This card more than doubles it.View Deal

128 GB SD card for Nintendo Switch (Officially Licensed by Nintendo) | £29.98 at Amazon (save 27%)
Supercharge your storage with this officially-licensed Nintendo 128 GB SD card at better than half price!
View Deal

Super Mario Party with Neon Joy-Cons | £79.99 at Argos
Grab yourself a bargain with this bundle – perfect for any Switch owner looking amp up the party this Christmas.View Deal

The Legend of Zelda: Link's Awakening  + 6-month Spotify Premium | £36.99 at Currys (Save £13)
This remake of the classic Game Boy adventure is a real joy, both for Zelda veterans and new players. From head-scratching puzzles to a top-down isometric view, this is old-school Zelda reborn.View Deal

Super Mario Odyssey + 6-month Spotify Premium| £36.99 at Currys (save £4)
Chances are, if you've bought a Nintendo Switch, it's to play this absolute gem of a game. Not only one of the finest Mario adventures to date - but one of the finest games, full stop.View Deal

Super Smash Bros. Ultimate + 6-month Spotify Premium | £43.99 at Currys (save £6)
Any Super Smash Bros. is worth the price of admission, but Ultimate takes that to the next level - this fighting epic is one of the best for years, and it stars all your favourite Nintendo characters.View Deal

Super Smash Bros. Ultimate + Mario Kart 8 Deluxe | £79.99 at Currys (save 99p)
Want both games? You're making a small saving by getting them together here. If you've already got Mario Kart, you can also buy the same deal with Super Mario Bros. U Deluxe instead.View Deal

Get two select games for £30 at Argos
Grab two Nintendo Switch games for just £30 from an awesome selection over at Argos. View Deal

Cyber Week game deals from across the web