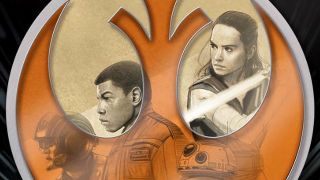 Rey was a quick study with a lightsaber as she clashed with Kylo Ren in Star Wars: The Force Awakens (probably because of that whole Force thing). But truly mastering one requires careful training, and some new art from Star Wars: The Last Jedi shows Rey practicing an elegant form to match her elegant weapon.

The illustrations appears on several new items which will be sold at Star Wars Celebration, with 25 percent of the profits benefiting UNICEF. The transparent medallion thing shows all three characters grouped together, as does one of the T-shirts - though you can also get a T-shirt with just Rey or BB-8 if you prefer.

Here we see a more complete look at Rey's new outfit, which resembles a lighter weight version of the flowing robes worn by the prequel trilogy Jedi. Luke must've kept some trainee uniforms lying around even after Kylo Ren wrecked his attempt to build a new Jedi order.

The group design reveals Finn still wearing Poe's jacket (it really does suit him) in The Last Jedi, and Poe in his usual X-wing pilot jumpsuit. As for BB-8? Well, he's as roly-poly as ever.

If you want to find out more, make sure you check out our full Star Wars: The Last Jedi news page.