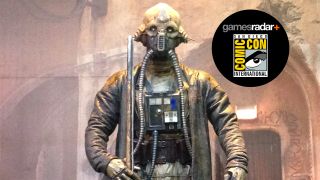 Rogue One's Jyn Erso is getting company. Well, more company than we expected. As well as the Death Star plan-stealing team we already know about, Lucasfilm/Disney have revealed a new character for Rogue One: A Star Wars Story at San Diego Comic Con in the form of alien mercenary Edrio Two Tubes.

The news comes courtesy of the Rogue One costumes and props display at SDCC which features... well, some of the costumes and props from the movie. We already got up close and personal with the exhibition at Star Wars Celebration Europe and while it was cool to see the outfits and weapons used in the upcoming movie, there weren't any major revelations.

Lucasfilm and Disney obviously felt they needed to add a little something extra for Comic Con though - maybe because Star Wars doesn't have a panel this year - and have included a never-before-seen 'costume' for Edrio Two Tubes.

So, who is Edrio Two Tubes? Check out the character description that was released along with the costume below...

Edrio Two Tubes is a mercenary pilot who flies alongside his eggmate, Benthic. The two share the nickname derived from the breathing apparatus that allows their Tognath physiology to process oxygen atmospheres. Edrio’s home world Yar Togna was conquered and occupied by the Empire, forcing him to flee as a refugee. Desiring to strike back at the Empire, Edrio and Benthic have allied with Saw Gerrera.

The Saw Gerrera mentioned in the description above is played by Forest Whitaker in the upcoming movie and was first introduced in The Clone Wars. And while he is one of the 'good guys', it's been hinted that he'll come into conflict with Jyn Erso's team over a difference in methods. I also learnt at SWCE that the Rebels Saw Gerrera leads are "extreme" which could include Two Tubes.

Directed by Gareth Edwards and starring Felicity Jones, Diego Luna, Riz Ahmed, Ben Mendelsohn, Forest Whitaker, and Alan Tudyk, Rogue One: A Star Wars Story is scheduled to open in UK and US cinemas on December 16, 2016.