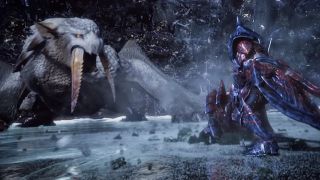 The Monster Hunter World: Iceborne Barioth is the triumphant return of a long-time fan favourite monster. The Barioth is a monstrous creature with the head of a sabertooth tiger and the body of a sabertooth tiger but with wings. It’s incredibly fast, incredibly powerful, and is likely to be one of the first walls that many new hunters run up against.

Barioth may not be as bulky as Iceborne’s other chill beasts, but that doesn’t stop it from unleashing a volley of attacks that can quickly cart your entire hunting party in seconds. This fight is all about quick reactions and looking for brief windows where you can launch deadly counter attacks. Keeping up with Barioth’s agile movements can be rather frustrating, so if you find yourself struggling to survive against Barioth or simply want some tips for hunting this icy terror, then be sure to check out our monster guide below.

Barioth are known to use their stealthy nature and tremendous speed to hunt down the herbivores that inhabit the snowy plains of Hoarfrost Reach. Just like most cat-like wyverns, Barioth is incredibly territorial and will attack anything that dares encroach upon its land. While Barioth mainly relies on its powerful hind legs, sharp claws, and huge amber tusks to rip and tear apart its prey, it also uses deadly AoE ice attacks that incapacitate those that try to fight or flee.

Barioth’s attacks are both quick and sporadic in nature, forcing hunters to find brief windows where they can weave in a few punishing hits. The majority of Barioth’s attacks are centered around its claws, which it uses to dig into the ice and deliver blisteringly-fast slashes. When Barioth sees its prey, it will quickly rush them down and deliver a deadly combo of attacks that leave them in the dust. To make matters even worse, Barioth can also incapacitate attackers by unleashing a chilly ice blast that creates a gigantic tornado. This attack has an incredible range, so don’t assume you’re safe just because the beast is away from you. If you happen to get caught within the blast’s radius, you’ll take a lot of damage and your movement will be severely reduced, not to mention the Iceblight that will befall you. This attack may seem rather intimidating at first, but it can be avoided with a well-timed dive or by simply running away from the targeted area. In fact, Barioth is completely defenceless during this attack’s animation and you’ll be able to deliver a few meaty hits to its head, giving you plenty of time to break its gigantic amber tusks.

Aiming for Barioth’s head should be a top priority for any hunting party, especially if you wish to reduce this monster’s agility. Barioth is incredibly susceptible to fatigue and becomes much easier to fight when tired, so try to take weapons that allow you to deal blunt damage. For example, shield bashes, hammer smashes, and charge blade guard points all reduce a monster’s stamina and can even KO them if you hit them in the head repeatedly. Barioth’s movements become sluggish when fatigued and it will often stand still to recover its stamina after its attacks, allowing you to easily break both its tusks and tail. To capitalise on this fatigue even further, consider bringing pitfall and shock traps to reduce your kill times and increase your chances of breaking those pesky amber tusks.

Meanwhile, if Barioth’s stamina draining attacks keep leading to frustrating deaths, then make sure you pouch is filled with Nulberries to instantly cure the Iceblight effect. As soon as Iceblight is active, hunters begin to consume more stamina when moving and using charge-based attacks. When you combine this with Barioth’s deadly wall jumps and fast dashes, you have a recipe for disaster. The humble Nulberry really is a lifesaver in this fight, so don’t forget to pack them if you want to avoid an untimely demise. If you prefer to not have to take the Nulberry, then make sure you’ve got the right gems equipped to protect you from the status effect. Lastly, consider equipping a Fire or Thunder weapon to capitalise on Barioth’s elemental weaknesses. Having a hunting party armed to the teeth with Fire and Thunder weapons will definitely help increase your chances of beating Iceborne’s killer kitty.