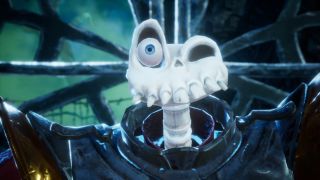 The composer of the original MediEvil series and the MediEvil Remake that appears to be teasing that a MediEvil 2 Remake could be in the works.

As spotted by PlayStationLifeStyle, the @SaveMediEvil twitter account - which is currently campaigning for a sequel to the remake with the hashtag ResurrectFortesque2 - tweeted MediEvil series composer Andrew Barnabas with the number "2." Barnabas replied by saying "Actually…", which could be a soft hint that remake of MediEvil 2 is being considered.

In another tweet, Barnabas also responded to a remark about the success of the MediEvil Remake and how it likely meant we wouldn't see a remake of 2. Barnabas simply said "I'm sorry you are incorrect," which can be read that a MediEvil 2 Remake may be on the horizon or that the first was a success.

Of course, this is all just a rumour at this point, and the tweets may well not be hinting at a Remake of 2, but they are coy enough to hint that we may see Sir Daniel Fortesque return once again for another round of hack and slash action.

The original release of MediEvil launched on the PS1 back in 1998. The first game also got a bit of a refresh some years later with MediEvil: Resurrection on PSP back in 2005. Developed by SCE Cambridge Studio and published by Sony, the recent remake came to PS4 last year from developer Other Ocean Interactive.

The 2019 remake has given the series a much needed revival, and it would be great to see the sequel get the same treatment for long-time fans of the skeleton hero.

Want to stay on top of the latest releases? Here are the best upcoming PS4 games for 2020 (and beyond), or check out the highlight reel below: