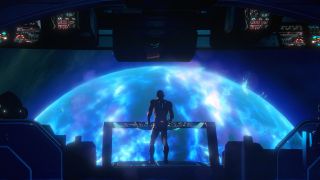 One of the greatest mysteries which pervades Mass Effect: Andromeda’s story is what happened to the three missing Arks which were supposed to arrive at the Nexus alongside the human colony ship. These are the Asari Ark, the Turian Ark, and the Salarian Ark, and it's up to Ryder to figure out what happened to these ships, carrying thousands of slumbering travellers.

You’ll discover leads on the whereabouts of each Ark as you progress throughout the story, but you’ll need to actively pursue these threads in order to find answers. This guide runs through the most effective means of completing the three Ark missions, and what you can expect within each of the ships themselves.

The hunt for the Asari Ark begins with Cora, who brings news via email to you after you’ve completed the main story mission A Better Beginning on Eos. Acknowledge the email and go talk to Harper, which will initiate the prerequisite mission Cora Harper: Asari Ark.

You’ll need to venture back to Eos and speak to an Asari refugee named Hydartia, who is situated in a building at the Prodromos outpost.

She will mention the existence of a ship called the Periphona, located somewhere on the ice planet Voeld, which is the second planet accessible to you after Eos.

Head to Voeld and go towards where the Periphona’s signal is coming from. At this point, SAM will mention that there could be several locations from which the signal originates, but it’ll be the one situated at the north part of the map.

Scan the wreckage to finish this mission, which is then put on hold until you complete the story mission called A Trail of Hope. Once you’ve done this, Cora will email you again with news of the Ark’s location - speak to her to begin the final mission Cora Harper: At Duty’s Edge, which is also her loyalty mission.

The mission waypoint will then guide you to the location of the Ark itself, which happens to be shut down and riddled with a Kett infestation.

The mission involves you taking out the Kett and restoring the Ark for use again, so be sure you’re appropriately equipped to deal with a large amount of enemies. After you’ve achieved this, finish up your conversations with the rest of the Asari crew, and the mystery of the Ark has been solved!

Next: The Turian Ark