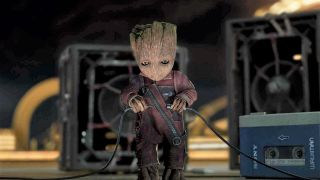 I know, I know. You probably don’t want to think about Marvel Phase 5 just yet – but someone has to. That responsibility, of course, falls squarely on the shoulders of Kevin Feige, head of Marvel Studios. He recently hinted that, although Marvel Phase 4 was the main takeaway from Marvel’s internet-breaking SDCC blowout, he nearly introduced Phase 5 of the MCU then, too. Not only that, but he’s reassuring fans that there’s a definite plan in place by revealing that Phase 5 is already mapped out.

Speaking to MTV News, Feige teased that things are pretty much set in stone for next two Phases: “We debated whether to announce [Phases] 4 and 5 today. We’ve planned them out; we’ve got five years down the road.”

So, why wasn’t Marvel Phase 5 up on the big screen in San Diego alongside Phase 4’s two-year stint? “I was like, ‘11 projects in two years is plenty,’” confirmed Feige.

We actually also have a pretty good idea as to what’s to come in Marvel Phase 5 thanks to Marvel’s big SDCC.

Captain Marvel 2, Guardians of the Galaxy 3, and Black Panther 2 were all name-checked by Feige, along with mentions of the Fantastic Four and the “mutants.” With Phase 4’s current slate ending in late 2021, you can possibly expect Marvel Phase 5 to begin in earnest in 2022, though plans can always change.

Heck, if you wanted to go one further, the pointed reference to five years means that 2025 should herald the arrival of Marvel Phase 6. But, by that point, we’ll all be old and weary. So, let’s not get too far ahead of ourselves.

For something a little more immediate, check our Release Radar, our look at the week ahead in games, TV, and film.