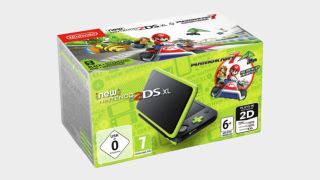 The incredible bargains are already here this Black Friday. You can get a cheap Nintendo 2DS XL with Mario Kart 7 for under £100 – just £94.99 at Argos today. It’s £40 off the RRP, too, so you’re essentially getting Mario Kart 7 for free in the bundle. It’s right up there with the best Black Friday Nintendo 2DS XL deals we’ve seen so far – and is the perfect complement to your Switch, especially if you’re looking to play some more retro games.

Not only does the 2DS XL do away with the 3D feature – which can be an eyesore – but you also get access to the entire 3DS and 2DS library. The 2DS XL, along with the 3DS XL, is the only handheld console that can play Xenoblade Chronicles. The difference? The 2DS XL is a lot cheaper. Same console, just without the gimmickry. Then there are the classics you might’ve missed out on over the years: Super Mario 3D Land, Metroid: Samus Returns, Animal Crossing: New Leaf, The Legend of Zelda: A Link Between Worlds, and much, much more. Seriously. Check out our best 3DS games after you’ve bought the console for at least 25 reasons why this 2DS XL deal is a steal. I play mine literally every day, and you will too.

Did I mention the retro games? You’re getting a bulky SNES library, including the likes of Super Mario World and A Link to the Past, but also scores of Game Boy and Game Boy Advance games to go along with it. Want to dive into more Pokemon titles after Sword and Shield? Pokemon Yellow, Gold, Silver, and Crystal are all available on the Nintendo eShop. And that’s not even scratching the surface. Phew.