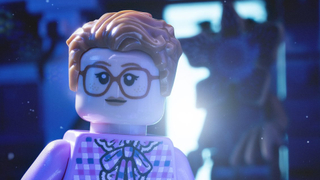 Stranger Things fans remember Barbara "Barb" Holland well from the first season of the hit Netflix show. She was unceremoniously killed by the demogorgon, a beast from another world, after getting ditched by her best friend.

Barb was barely mentioned again for the rest of the show, accept for a quick shot of her body during the season's climax. #JusticeforBarb hashtags popped up all over, partly serious and partly a joke, calling for a better resolution for the character.

Lego didn't like Barb's ending in Stranger Things either. In fact, they disliked it so much that they created a figure to immortalize her forever. It is debuting at San Diego Comic Con next week.

While you can get Eleven, Mike, and a handful of other members of the cast in Lego form in the Upside Down Lego set for a clean $200, the Barb figure won't be available for purchase. It'll be part of a special giveaway event at Comic-Con. Fans can enter for a chance to win on July 19, more details to come later on. Keep an eye on Lego's social media accounts for a chance to enter.

Barb did get some more screen time in the second season of Stranger Things, but only to wrap her story up after fan demand. If you're at Comic-Con and miss Barb's signature glasses then enter for a chance to win.

Haven't checked out the latest episodes in the nostalgic Netflix show? Check out our review of Stranger Things: season 3