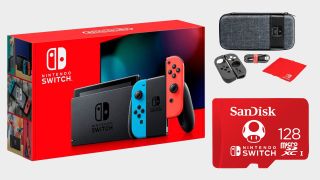 Here it is, one of the best Nintendo Switch Cyber Monday deals we have found so far! You can grab a Nintendo Switch console with a pair of Joy-Con controllers, a 128GB microSDXC memory card, and an accessory set that includes a variety of helpful items to keep your Switch safe while on the move for just $344.97 at Walmart right now.

Nintendo rarely discounts its games, consoles, or accessories, which is what makes this Best Buy deal so damned appealing. You'll be saving $48, which is more than enough to free you up to buy some awesome things to play on your new console – and hey, we're tracking every Cyber Monday Nintendo Switch game deal, should that be of any interest to you.

Nintendo Switch with Neon Red/Blue Joy-Con + Memory Card and Elite Starter Kit | $344.97 at Best Buy
The ultimate starter kit for the Nintendo Switch, a perfect purchase to yourself or as a gift to others this holiday season!View Deal

Nintendo Switch with Gray Joy-Con + Memory Card and Elite Edition Starter Kit | $344.97 at Best Buy
The same deal as above, only this one comes with delightfully simple gray Joy-Con controllers rather than the Neon Red/Blue.View Deal

There are so many deals happening right now that it can easy for all the best ones to get lost in the noise. That's why we have been tracking the best Cyber Monday game deals, as well as some of the hottest still running from Black Friday. You are super welcome.