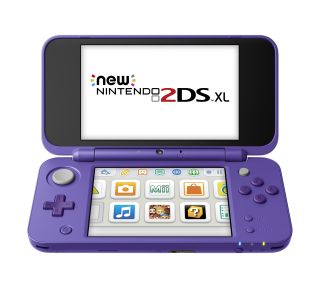 The New Nintendo 2DS XL is widely regarded as the best iteration in the DS line of handhelds, and thanks to this early Black Friday deal from Walmart, you can get a purple New Nintendo 2DS XL with Mario Kart 7 pre-installed for just $129. It's hard to find this handheld for under $150 in the best of times, especially in rarer colors, so this is easily one of the best 2DS XL deals of the year.

If you're wondering what makes the 2DS XL so special, you need only look at its predecessors: the 3DS XL and the 2DS. The 2DS XL improves on both prior models by combining their strengths. It takes its clamshell form factor and superb button layout from the 3DS XL, and it gets its improved, no-frills screen from the base 2DS. For all but the most diehard fans of paltry 3D effects, it's everything you could ever want from a DS without any of the gimmicks, and it's cheaper to boot. It's no Switch, but the 2DS XL is still a fantastic system with a massive library of classic games, and at this price point it's borderline unmissable.

If you're looking for 2DS XL deals in other colors - namely black-and-blue and white-and-orange - be sure to check out our Black Friday Nintendo 2DS XL deals roundup. We've also got a healthy list of the best 3DS games, from staples like Mario and Zelda to little-known gems like BoxBoy and Picross 3D Round 2. And you'd better believe that Mario Kart 7, the game that comes with this bundle, is on our list as well.