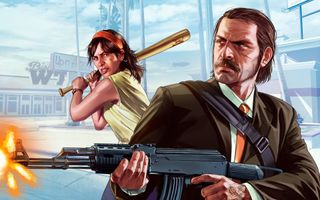 If you've been enjoying your time rampaging around Los Santos and Blaine County but feel like things are starting to get stale, it's understandable that you may be looking for other games like GTA. Let's face it, a lot of us have been in that world since 2013, and although Rockstar continue to tease us with the prospect of GTA 6 we still have a long wait ahead of us. In the meantime, there are plenty of other ways to cure your cravings with a GTA-flavoured substitute, and we've picked out our favourites for you. Here are 10 games like GTA to keep you entertained until we find out where Grand Theft Auto is taking us next.

You can probably guess why this one’s one here - both the GTA series and Red Dead are made by the same studio, after all. Despite the early 20th century setting, Red Dead Redemption 2 (and its predecessor, if you feel like taking a step back in time) exemplify GTA's values of player freedom in an expansive open world that feels alive, a commitment to including even the most minute details, and morally questionable men and women doing morally questionable things. It would be oversimplifying the experience to call Red Dead Redemption 2 "Grand Theft Auto with horses", but it's well worth checking out if you're in a GTA sort of mood.

Saints Row started as a pale imitation of GTA, desperately aping Rockstar's designs. The result was a lacklustre effort that garnered a cult following for two games, but failed to stand apart. That all changed with Saints Row: The Third, which looked at how grim and serious GTA games were getting, said, "f that," and went balls-to-the-wall silly. This is a game where your gang is so famous and beloved that the opening mission has you robbing a bank dressed in novelty costumes of... yourselves. There's a small-scale zombie apocalypse, player choices that actually matter, Burt f***ing Reynolds, and a three-foot long dildo bat melee weapon. Lots of GTA-likes get bogged down in being self-serious, while Saints Row is content to just be as silly as it possibly can be. True it's a bit of an older game, but it's backwards compatible on Xbox One and was ported to Nintendo Switch in 2019, so you have an excellent excuse to revisit the Saints.

Just Cause 4 delights in unprecedented levels of chaos, and it accomplishes this by giving you, the player, a ridiculous amount of freedom. Wingsuit: check. Grappling hook: check. The ability to surf on cars as a massive tornado lifts them into the air: double-check. If you were amused by the ragdoll physics of GTA 5, just wait till you see what you can achieve in The Republic of Medici. To be clear, Just Cause 4 holds none of the storytelling class or mechanical polish of Rockstar’s signature franchise, but it instead excels with its (literally) sky high approach to choreographing carnage on a massive scale.

The original Watch Dogs was such a sour-hearted affair that Aiden Pearce’s tale of revenge becomes almost unbearable by the end of it, but Ubisoft took that criticism to heart for the sequel. As such, the studio’s follow-up eschews much more closely to the sentiments and tone of contemporary Grand Theft Auto titles, by using its setting as the stage for biting satire. Remember the “Life Invader” mission from Grand Theft Auto 5? Watch Dogs 2 is essentially that, but blown up to the scale of an entire game. Rockstar’s parody of Silicon Valley still packs a little more punch than Ubisoft’s, but Watch Dogs 2 regardless holds plenty of laughs for anyone who’s had to sit through an Apple conference or a Facebook commercial. And hey, you get to use pool balls attached to bungee cord as a weapon - that's pretty sweet.

Grand Theft Auto has always been celebrated for the way it brings cities to life, cramming its virtual worlds with dozens of side activities to enjoy outside of the main campaign. Yakuza 0 takes this design philosophy and goes to town on it. Where Grand Theft Auto 5 has tennis, yoga and stock brokering, Yakuza 0 offers up karaoke, pool, arcades, wrestling, bowling, dancing, gambling and… uh, awkwardly viewing some explicit material in the back of a video store. As that last one can attest to, not all of the side activities are tastefully made, but the sheer volume and diversity of things to do is staggering. The scale isn't nearly as expansive as GTA, but what Yakuza lacks in quantity, it makes up for in (quirky, offbeat) quality.

Very much sticking to its name by turning into a sleeper hit back in 2012, Sleeping Dogs brings the likes of martial arts and B-movie stunt action to the conventions of the open-world crime genre. The result feels like a Grand Theft Auto game dressed in the garb of a classic Bruce Lee film, and it’s fantastic. Sadly the sequel, which apparently included a co-op campaign, got canned while still in the early stages of development, making Sleeping Dogs a rare gem that deserves more appreciation for the new ideas it brought to the table. The game even re-released on the PlayStation 4 and Xbox One in 2014, so there’s really no excuse to let Sleeping Dogs lie on the store shelf anymore (sorry).

There is yet to exist a Grand Theft Auto game which doesn’t include a run-in with the Mafia in some measure, which naturally leaves 2K’s Mafia series as a good starting point for open-world enthusiasts with a taste for organized crime. These games come across as more grounded than the GTA series and its ilk, but you can easily see the echoes of titles like San Andreas and Grand Theft Auto 4 shining through their design. Mafia 3, the series’ most recent release from studio Hangar 13, hews more closely to the likes of Rockstar with a focus on side activities and a story centered around a war veteran trying to escape the demons of his past (Niko Bellic, anyone?). That said, the meaty, slow-burning narrative is as much inspired by the likes of The Godfather and Goodfellas as it is Grand Theft Auto, written so effectively that you’ll sometimes forget you’re playing a video game and not watching a Scorsese flick.

There’s a good reason that almost every Grand Theft Auto game has been labelled as intended for mature audiences only, but what about those of us who want to enjoy cops and robbers without the sex, drugs or rock and roll? Luckily, TT Games came up with the next best thing in 2013. 'Lego Grand Theft Auto' is a cliched but nevertheless effective pitch for Lego City Undercover, but this adorable open-world platformer hides much more up its plastic sleeve than mere imitation. The brick-based visuals are delightful, the litany of side-quests and collectibles are deceptively well-polished, and the pop culture reference-laden story is a hoot. For those who are able to pick up the recent re-release of the game, Lego City Undercover can now also be enjoyed as a co-op experience, or even a travel-handy one with the Nintendo Switch.

If you’re someone who particularly enjoyed Grand Theft Auto 4’s infamous ‘Three Leaf Clover’ mission or Grand Theft Auto 5’s heists, Payday 2 is going to be right up your alley. Overkill Software’s multiplayer co-op romp lets players loose on a series of high-stakes break-ins and robberies, but it’s not as simple as grabbing the money and legging it. Similar to the capers of Michael, Trevor and Franklin, Payday 2 encourages players to strategize and think through their game plan down to every minute detail, even letting them scope out the place before committing the deed later on that same day. The focus on online co-operative squad-play also brings to mind the multiplayer heists introduced to Grand Theft Auto Online in 2013, but Payday 2 luckily comes without those painstaking loading times.

Yes, this is definitely much older than most entries on this list, and a popular animated sitcom isn’t the first setting that comes to mind for a GTA-style video game, but Radical Entertainment achieved the unimaginable with this cult-classic hit from 2003. Homer and the gang aren’t able to commit atrocities on the same level as someone like Niko or Trevor, of course, but you can still cause all manner of mayhem across Springfield by kicking and punching to your heart’s content. The Simpsons: Hit & Run is as much a game for Simpsons fans as it is for Grand Theft Auto veterans, as the game smartly peppers references to its serialised namesake across the entirety of the campaign. Truth be told, Simpsons Hit and Run is generally agreed to be one of, if not the best Simpsons video game of all time. If you've got the means to play it and somehow haven't already, go fix that right now.

If all of this has whet you appetite for GTA 6, you can also check out our predictions for it in the video below: