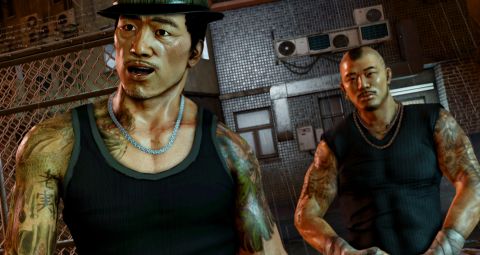 Open-world games are marvels of modern technology and, as such, they usually have issues that are often condoned in favor of the bigger picture. Simplistic melee, sloppy gunplay, or loose driving can be ignored if everything else is strong. Sleeping Dogs made no such concessions on its original release on Xbox 360, PC and PS3, attempting to top the rest by borrowing from the best in the genre, taking cues from many contemporaneous open-world games - from Arkham City to Just Cause 2 - to make for an extremely sexy Frankenstein’s Monster of a game. While the two years since its original release have undoubtedly lessened its impact, the Definitive Edition makes this slickness even slicker--so check out the boxout below for exactly what the new version offers over the original experience reviewed below.

At first, it certainly does appear to be inspired by Rockstar’s Grand Theft Auto series, with protagonist Wei Shen thrown into a life of crime and asked to do horrendous things to progress the plot. But quickly it reveals itself to be much more than that. Early on it's explained that Shen is actually an undercover cop, sent into Hong Kong to climb the ranks of the Triads and take them down from the inside, creating a conflicted protagonist that's easy to sympathize with.

Sleeping Dogs on PS4 and Xbox One

Sleeping Dogs already looks lovely, so the remaster’s high-density traffic and enhanced resolution don’t advance things massively. The draw here is value, not flash, because bundled with the game are 24 DLC expansions including The Zodiac Tournament, Nightmare in North Point, and Year of the Snake, along with a glut of costumes that let you dress as Jackie Chan’s drunken master or don a barcode and bald head like Agent 47. However, it's aged in two years, especially in this post-GTA5 world, so is probably not worth buying again if you already have it, although Steam owners get a 50% discount if they already own the game. That said, if you've never played Sleeping Dogs, this is undoubtedly the version to get.

This small detail makes a big difference, both in terms of story and gameplay. Shen has understandable motives that extend far beyond simply trying to make a bunch of money. He’s not an amoral killer--he’s a cop thrown into the middle of something big, and that stress gets to him quickly, creating a well-developed, likable character.

You’ll constantly be passed between different members of the Triad as you work your way towards the top of the food chain, all the while needing to balance out your work with the police, making for entertaining (albeit slightly repetitive) missions. The characters you work for lack the colorful flare of those found in games like Grand Theft Auto and you'll never feel all that connected to any of them, even if you fall for the undercover cop angle, which definitely adds to the tried and true open-world story formula.

As a player, it also means trying to balance the Cop and Triad side of things, with different missions rewarding you with bonus points depending on how the levels are played. Kill everyone and destroy everything and your brutal actions will earn you Triad points, which can be used to access powerful, brutal abilities, whereas playing things more professionally will unlock equally-powerful Cop abilities. New melee attacks, awesome weapon skills, and driving bonuses are just some of the upgrades Wei gains access to in his quest to earn the trust of his fellow gang members (and police officers).

Each element has some rough edges, from an occasionally finicky camera to sometimes inconsistent collision detection, but the problems were never enough to keep us down for more than a few seconds. Melee is as brutal as it is well-developed--Wei can take on limitless foes, waiting until they’re about to strike before executing a brutal counter-attack. He can go on the offensive, too, using dozens of abilities and combos to break the arms and legs of his opponents. The more varied his attacks are the higher his Face meter rises, eventually causing his enemies to flinch once they’ve seen exactly how powerful the Triad member is.

What’s more, grappling enemies opens up additional options, allowing Wei to drag his enemies over to objects for environmental kills, or to just throw them off ledges or into enemies. This flexibility makes for highly entertaining melee battles, and no matter how many times you're thrown into a room with a dozen enemies to defeat you'll always enjoy your time doing it.

Sleeping Dogs gunplay is robust, even if it is deemphasized in favor of fists (or knives, or tire-irons, or fish). The combat features a cover system and slow-motion that triggers whenever you leap over an object in the environment, allowing you to clear rooms without an issue. It’s always fast, it’s always rewarding, and it’s always fun, pulling from the best in the genre. Better yet, using melee on an enemy while holding a weapon triggers unique attacks, like Shen running up his foe’s chest and then kicking off in slow motion for an awesome action-movie attack.

And, of course, there’s driving, which is much smoother than it is in most others in the genre. Besides being able to drift around corners and shoot out enemies’ tires (causing them to flip through the air and explode, obviously), Wei can also smash into enemy vehicles to disable them, or even leap from one car to another, carjacking them while they’re speeding down the highway. It’s extremely amusing to jump from car to car, making the driving segments of the game much more enjoyable than those found in other open-world games.

When all of these elements mix together (with a dash of parkour thrown in for good measure), Sleeping Dogs rises to the top, surpassing nearly every other sandbox-style game. Every single action is so entertaining that we’d go looking for trouble just as an excuse to use our fun melee takedowns, awesome gunplay, and fantastic driving skills. Thankfully, the game provides bountiful opportunities to use these skills, both in the game’s lengthy campaign--which takes some 15 hours to complete--and the plentiful side missions, which can easily tack on another 10. Doing favors for pedestrians or busting drug-dealers kept us constantly engaged, making it difficult to ever put down the controller.

But while small problems with controls and occasional glitches won't hold you back, you might become frustrated by the fact that Sleeping Dogs never fully embraces how fun Sleeping Dogs is to play. A majority of story missions are fairly basic, and though they are inherently entertaining because of how remarkably enjoyable the components are, they are never all that interesting in their own right. With such great gameplay you'd expect equally insane missions, but while there are some standout instances, a majority of the time you'll be doing the same handful of things the same way each time.

It's more limiting than it needs to be, and too linear on a mission-to-mission basis. You'll get involved in a chase and wonder why you can't just shoot the tires out of the enemy you're pursuing, or wonder why you can't tackle the guy you're chasing even though you're right behind him. Sleeping Dogs lets you do plenty of cool stuff, but not letting you do it when you want to do it is sort of a buzzkill. You're given all of these awesome tools and then forced to only use them in the order the game sees fit. It’s still fun, and it’s still great, but it's just a little too conservative with its awesome abilities when it could allow for more sandbox freedom.

When Sleeping Dogs grabs hold of you it absolutely refused to let go. You'll be amazed by the sheer amount of content, and how compelled you'll be to consume every drop of it. You'll want to unlock every costume, complete every side mission, and play until there isn't a single drop of Hong Kong left for you to see. After being renamed, delayed, canceled, sold, bought, and then renamed again all in the course of four years, Sleeping Dogs had every excuse in the world to be a letdown, but just like Wei Shen, it's empowered by its tumultuous past, and much more than it appears at a glance.

This review and score was based on the original PC version--see the boxout for how the Definitive Version on Xbox One, PC and PS4 compares.