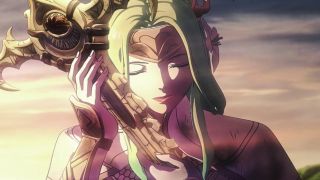 You could easily spend dozens and dozens of hours on a single playthrough of Fire Emblem: Three Houses. You will probably become more than a little attached to your progress in that time. Now, at least one player has discovered a glitch that could cause your save file to become unplayable if you save and exit at the wrong time, which sounds terrifying, but in most cases a solution should be within easy reach

Before I go any further, this article will include very mild spoilers for a Blue Lions house playthrough. It will list the title of a mission and show you gameplay footage of the friendly units lined up at the start of that mission. That's all!

Twitch streamer Trapslow suffered the game-breaking glitch while playing The Silver Maiden paralogue mission in the Blue Lions path. After exiting the game, Trapslow went to load a save they made during the Preparation phase of the mission. Once the save loaded, there was no interface, and they were unable to start the mission or do anything besides stare at the battlefield.

[PLS RT] On the Blue Lions route in Three Houses, there is a paralogue called Silver Maiden. DO NOT SAVE AT THE PREPARATIONS SCREEN!!! If you do so, you can hardlock your save file and be forced to restart the entire game!August 6, 2019

A quick survey of Reddit and Twitter responses shows that plenty of players have made it through The Silver Maiden with no problems, so it looks like the issue is limited to players who make a manual saving during the Preparation phase and quit out of the game. Attempting to load that save is likely what causes the glitch.

Fortunately, Fire Emblem: Three Houses has a solution built right in. The game's autosave feature activates at certain times as you navigate your life of battle and teen drama, and crucially, it does not trigger during the Preparation phase. Even if your main manual save is broken, you should be able to continue from your autosave and lose no more than a few minutes worth of effort.

One caveat keeps that method from being a foolproof fix: the game only has one autosave slot. If you start another playthrough that overwrites the autosave from your first campaign, and you only have one manual save from your first playthrough, and it's broken, you're in trouble. Any game-breaking bug is a big problem, no matter how specific it may be, so hopefully Nintendo and Intelligent Systems will put out an update that fixes this issue fast.

See what else is coming to the game with our rundown of the Fire Emblem: Three Houses expansion pass.