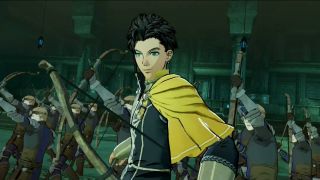 Fire Emblem: Three Houses takes us on an epic journey filled with engrossing grid-based combat and character-driven stories. As you set jump into this RPG, you'll be looking at taking on a 40+ hour campaign, and that only covers one route. With a host of new features introduced, lots of tactical approaches to take, and all kinds of things to discover, you'll have a lot of ground cover.

From weird glowing spots on the battlefield to changes the game introduces to the series that are hard to get used to, I found myself continuously discovering new things deep into my play-through.

Here are seven Fire Emblem: Three Houses tips you should know before going to war.

1. Pay attention to the glowing spots on the battlefield

The battlefield is usually cluttered and intimidating with high level opponents, various terrain types (some that cause damage), and odd little intricacies. During most battles there will be little blue and green glowing spots across the map. The blue spots are dropped weapons from previous battles and the green spots are free experience for whichever character that steps on them. Nintendo has plans to make these spots correspond with other players campaigns, meaning the spots on the battlefield will be from characters that die in game saves from all around the world.

The green spots are valuable and worth the extra effort to move a unit to. The blue units can seem pointless at first since they only give out rusted weapons. You'll still want to pick these up whenever possible since rusted weapons can be taken back to the blacksmith to be reforged. Sometimes these rusted weapons can be rare silver or steel lances, swords, and axes. Press X to see the details of what kind of metal the rusted weapon has before you decide to repair it. Some weaker weapons are worth leaving rusted.

2. You can make enemy movement ranges visible on the battlefield

With a simple button press (ZR) you can turn on the movement and attack ranges for all enemies. It's a somewhat cheap, and incredibly useful, option that can help you gameplan each move while knowing if a movement will put you in enemy range. You can also select individual enemy units to see their individual range.

After your several hours into the story you'll gain the ability to assign battalions to units. Battalions are individual groups of soldiers that provide stat bonuses and special attacks to the unit they're assigned to. They level up through experience in battle and they take losses just like any other army.

You'll need to go to the battalion section of the marketplace, either during free roam or via a menu before battle, to replenish your battalion numbers between each fight. You can replenish individual units or hit the plus button on the Switch to replenish everyone. It costs a little bit of gold in order to replenish, but it's worth it to spend that money before every battle.

4. Make sure to update loadouts after each battle

Everyone weapon has a certain amount of hits it can deal before breaking, once broken they'll become near useless pieces of metal that need to be repaired at the blacksmith. Early on, every unit will be equipped with a weak iron or training weapon that don't deal a ton of damage.

Soon after starting you'll have access to a wide variety of weapons through the glowing spots on the battlefield, rewards for monastery missions, in chest during fights, and at the armory. Make sure to update each character loadout whenever you get the chance. New items, including ones that provide permanent stat increases, are constantly making their way to your convoy. A weapon upgrade or extra vulnerary can make all the difference during a tough fight.

5. Use your renown to gain skill points from the gods

During your first play through you'll gain a lot of renown points from completing quests while running around the monastery and beating enemy armies on the battlefield. These can be used to pray to four statues within the cathedral that provide skill bonuses and other stat boosts.

It's as simple as navigating to the top of the map to the cathedral, entering the little side room in the top right corner, and talking to the priest near the statues. The four are broken out by weapon type, with each statue focusing on either bow, lance, sword, or axe.

6. Keep multiple chest and door keys in the convoy

Several levels throughout the campaign will have multiple doors and chests scattered throughout the map. The normal way to get through these missions is to defeat specific enemies, get the key, and then get the key to the specific door or chest.

A much easier way is to just keep several keys in your convoy. Your player character, and anyone standing next to them, can access the convoy from anywhere on the battlefield. Therefore all you'll need to do is navigate them to the locked item, grab a key from the convoy, and unlock it. It saves time and always gives you the option to unlock all miscellaneous chests (which usually contain rare items).

7. Buy gifts from the merchants and give them to your favorite characters

Relationships are key in Three Houses and buying your students and fellow soldiers gifts is a quick way to their hearts. Once you complete early game side quests new merchants that sell special gifts will come to the monastery to sell their wares.

These gifts can help improve support levels, open up new monastery activities, and get you one step closer to marriage. Be sure to check back multiple times as more merchants come as you get further in the campaign.