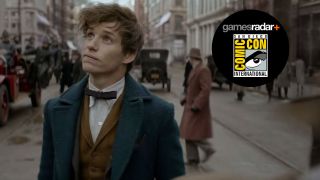 Fantastic Beasts and Where To Find Them is the highly-anticipated return to JK Rowling's wizarding world of Harry Potter, scheduled to hit our screens later this year. Except this ain't no sequel. Nor is it a reboot.

Instead Rowling's original screenplay whisks us away to a new nook in the magical world. 1920s New York City, to be precise which is where we meet Eddie Redmayne's Newt Scamander. He's featured in earlier trailers, and this newest preview straight out of San Diego Comic Con sheds light on those escaped creatures he's desperate to hunt down...

Those of you hoping for a return to the big, showier parts of the Potter cinematic universe ought to be pretty pleased with what's on offer here. Earlier footage has focused mainly on Scamander's journey to America, touching briefly on the creatures he has locked away in a battered old suitcase. This one brings out the big guns... literally. Magic knows no bounds, you see, so while his case is small, it contains huge monsters that send the whole of New York into panic. If you were sat on the fence before this trailer might just change your mind.

Directed by David Yates and starring Eddie Redmayne, Katherine Waterston, Farrell, Samantha Morton, Jon Voight, Gemma Chan, Ron Perlman and Ezra Miller, Fantastic Beasts and Where to Find Them is scheduled to arrive in UK and US cinemas on November 18, 2016.