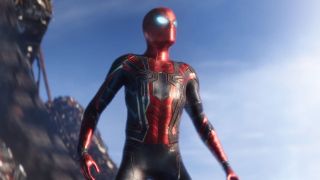 I know, I know. You probably still haven’t recovered yet from Avengers: Infinity War, but that doesn’t mean you aren’t desperate to pick up the Blu-ray release, right? Well, you’re in luck! Not only has Marvel jumped the gun by announcing the release date early, there’s also a batch of exclusive editions to get excited about too.

According to MovieWeb, a now-deleted tweet from the official Avengers account has laid bare two release dates for the two versions of Infinity War we’ll be able to get our hands on (in the US, at least).

Digital and 4K UHD will be available on virtual shelves from July 31. Every other version, from DVD to Blu-ray is free to purchase two weeks later on August 14. As for the UK? The Amazon UK listing for Infinity War doesn’t have a set release day. Boo!

Now, let’s get down to the nitty gritty and pore over those features. According to the now sadly deleted tweets showcasing both Best Buy and Target’s special Infinity War Blu-ray releases, there’s a serious case for every MCU megafan needing to purchase both editions.

As you can see, however, Best Buy’s collection comes with three discs, including a special documentary titled Marvel Studios: The First Ten Years. It also has a beautiful Thanos cover. I want, like, a billion of these right now.

Target’s (again, deleted) piece de resistance happens to be something completely different, which will irritate completionists everywhere. It’s a 40-page behind-the-scenes gallery book that is sure to shed new light on MCU’s biggest effort yet.

Again, it’s not known how many (if any) of these special features will arrive worldwide but – hint, hint – Blu-ray is region-free should you want to pay an arm and a leg for postage come August 14. I think it’ll be worth it.

Ok, you still haven't gotten over Marvel ripping up your hopes and dreams.. Hopefully our look at the Avengers: Infinity War ending will help in the meantime.