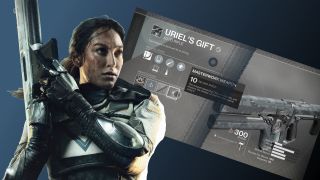 After a week of Curse of Osiris, Bungie has permanently changed the landscape of Destiny 2 once again, with the introduction of a new weapon tier as part of this week’s update. Masterworks is the name of this new category of weapon rarity, but what advantages do they bring over a regular ol’ Legendary piece of gear in Destiny 2? More importantly, how do they work, and how do you get one?

After putting a good deal of time into the new system, I’ve put together this simple primer on Masterworks, which details everything you need to know about the biggest change to the Destiny gear system since, well... since Destiny 2. Let’s start with the most obvious question first...

What are Masterwork weapons?

That means the official tier hierarchy is now as follows: Basic (white), Uncommon (green), Rare (blue), Legendary (purple), Masterworks (purple with golden border), and Exotic (yellow). For all intents and purposes, Masterwork weapons will look and feel the same as the Legendary gun they’re based upon, aside from a few key differences….

Unlike the clear distinctions between a Legendary and an Exotic, Masterworks instead add subtle but significant tweaks to the existing framework of the Legendary weapons that they’re based upon. For example, they allow you to both track and display the number of kills you’ve obtained with that weapon, either in terms of Vanguard killcount or just your confirmed kills in Crucible matches (you’ll only be able to switch this tracker by spending 10 Masterwork Cores and 25 Legendary Shards). .

Masterworks can also drop light orbs for yourself and nearby allies when you score a multi-kill but, more importantly, they will tag on a stat bonus (on top of the Legendary weapon’s original stats) selected randomly from a small pool of particular perks. That means if you don’t receive the specific stat bonus you were looking for, you can re-roll to try for another different bonus by spending 3 Masterwork Cores (the resource acquired by dismantling a Masterwork weapon) and 25 Legendary Shards.

How do I get a Masterwork weapon?

Well, for starters, you need to be at least power level 250 or above; check out our guide on how to level up fast in Destiny 2 if you’re not quite there yet. If you’ve already passed that threshold, then every Legendary weapon that drops during any activity has a chance to drop as a Masterwork variant of that same weapon. However, Bungie says that the Leviathan Raid and Trials of the Nine are the most likely place for Masterworks to drop, so that’s where you should focus if you’re desperate to nab yourself one.

Alternatively, any Masterwork weapon you own can be dismantled into Masterwork Cores (you’ll receive between one and three per gun) to upgrade any of your Legendary weapons into its Masterwork edition, but you’ll need at least 10 of those plus 25 Legendary Shards to complete this process, for each gun you upgrade. Think of it like Pokemon, as you evolve your best Legendary into its final form, and you get the idea.

Why are Masterworks a big deal?

They may not be the highest rarity weapon type, but the flexibility of the Masterworks system is Bungie’s way of opening up player customization to more meaningful forms of self-expression; with the ability to tinker with a weapon’s statistical upgrades presenting a depth of player freedom that Destiny 2 fans have long been clamouring for.

That said, the randomized nature of the stat rolls means that Masterworks - like a lot of things in Destiny 2 - emphasise chance at the expense of choice, undermining the impact of their significance to a certain degree. Here’s hoping Bungie can remedy this in the near future.

11 things I wish I knew before playing Destiny 2: Curse of Osiris

Speaking of which, the modifiable stat bonuses are the foundation for experimenting with and discovering powerful new combos between a weapon’s handling and the kind of perks that it could benefit from. Acquire the improved handling bonus on something like Shepherd’s Watch, for example, and you’ve got yourself a weapon that’s arguably more powerful and effective than some of the less valuable Exotic snipers out there. Other perks I’ve seen so far include increased reload speed and a higher magazine count, but I’ve yet to come across the same bonus twice.

You can expect to see more and more players coming up with their own favourite Masterwork builds as time goes on, and I’m sure new theories and strategies relating to this aspect of the Masterworks tier are going to change up Crucible meta in a number of unexpected ways.

Finally, unlike Exotics, which Guardians can only equip one of at any time, you can wield as many Masterwork weapons as you like. Find the right combination, and you can seriously boost your Guardian’s fighting rigour with multiple Masterworks equipped, especially at end-game level.

Can I get Masterworks armour?

Not yet, but Bungie says it has “future plans to extend Masterworks to other gear and expose your kill counts in more places”, so make of that what you will for now.

For more Destiny 2 tips and pointers, head on over to our guide mega hub, which tells you everything you need to know about the game, and now includes walkthroughs for all nine of Curse of Osiris' campaign missions.