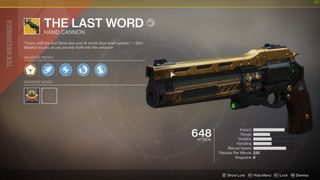 The Destiny 2 Last Word is a bit weaker than the original version of the gun, but that's mainly because it isn't bugged so it won't randomly two-shot people in the Crucible. It's still an incredibly powerful close- to mid-range hand cannon though, dealing more damage than 180-RPM models at a considerably higher rate of fire. It's also one of the most unique Exotics around, and unlike the original gun, the Destiny 2 Last Word has its own Exotic quest. It will require some Crucible matches, but every type of player can knock it out with a little help and effort. Here's how to clear the Destiny 2 Last Word quest, The Draw, as quickly and efficiently as possible.

To start The Draw, head to the Tower and talk to the Drifter. He'll give you a Hive artifact which you need to cleanse by killing Hive, killing Hive bosses, and killing Hive with solar damage. Escalation Protocol is the best way to get all these steps done simultaneously, so head to Mars and start shooting. The solar kills take much longer than the other two requirements, so optimize for solar damage: use a solar subclass, a solar energy weapon (Sunshot is great), and a solar heavy (the Avalanche machine gun is ideal).

Return to the Drifter and your cleansed artifact will be upgraded to The Temptation. To satisfy this creepy thing, you'll need to kill Guardians in the Crucible. However, you will lose progress when you die, so you have to play smart. You'll want to aim for at least a 1.0 KDA in order to progress at a decent rate - mercifully, assists do count - but as long as you're over 0.5, you'll get it eventually. Even if you aren't a Crucible savant, you can clear this step with a bit of time and effort. Play with friends, play conservatively, leave lobbies if you're getting stomped - do what you have to do.

Once you get enough kills, you'll receive The Damnation. This unlocks a new mission on Titan in the so-called Ogre Lost Sector to the left of the Rig. The Power for this mission scales to your level, so as long as you're over 500, you're fine. Head down to the heart of the Lost Sector where, instead of the usual Ogre boss, you'll find a shielded Hive Acolyte. To lower its shield, kill the two Wizards guarding it. Try to save your heavy ammo and super for the Acolyte as your DPS window is limited. If its shield returns before you kill it, just kill the Wizards again.

Head back to the Drifter and he'll tell you to sully your light. With four different objectives, this is by far the longest step in The Draw. Luckily, it's possible to knock out multiple requirements simultaneously.

Let's start with the 15 Etched Crystals and the 50 Hive Larvae. You can get both of these by repeatedly running the normal version of the Ogre Lost Sector you just cleared out. The normal enemies in the Lost Sector will drop Hive Larvae when you kill them with headshots - though it isn't a guaranteed drop - and the boss Ogre will always drop an Etched Crystal. You'll finish off the Larvae in a few runs, so once you're done with them, just start running in and killing the boss before fast-travelling back to the Rig. This method has the added advantage of keeping you near the location of the Hive Ritual public event (right next to the Rig landing zone), so if you see one spooling up, be sure to stop and join the event.

You'll probably finish the Etched Crystals and Hive Larvae before you clear three Hive Rituals, so rather than waiting around, I recommend starting on the Blood for Blood and Best Served Cold Crucible medals. While you're farming these medals, you can check the public events on Titan and Mars (the Hive Ritual appears at the northern tip of Mars' southern zone) in between matches, which will save you a lot of standing around.

As for the medals themselves: you get Blood for Blood by killing an enemy who just killed a teammate, and you get Best Served Cold by killing the enemy who killed you last. These medals rely on you or your teammates dying, so there's no great way to farm them. Just stick to your teammates, push up whenever a nearby enemy gets a kill, and remember the names and locations of the players who kill you so you can seek revenge. A good way to guarantee a Blood for Blood medal is to super an enemy after they use their super to kill one or more of your teammates.

Speaking of super kills: Mayhem is the best Crucible playlist to farm these medals because, well, it's mayhem. These medals require death and players die more rapidly in Mayhem, so it just makes sense. Mayhem is still available at the time of this writing, but if you're reading this in the far, far future, just stick to whatever playlist you're most comfortable with (except Rumble, obviously, given that you won't have any teammates to avenge).

Once you've gathered all the necessary materials and medals, return to the Drifter and you'll receive The Conversation. This unlocks a new mission in the Tangled Shore, so head to the Thieves' Landing landing zone and then head south through the Hive ruins. It's pretty straightforward stuff for the most part: shoot the dudes, put the worm in the wall, shoot the Wizards when their shields drop, shoot the big crystal, and jump down the big hole.

Here's where things get interesting. When you jump down the big hole, you'll land in the Broodhold, where your health regen will be suppressed. Follow the linear path forward until you reach a Hive plate marked by a waypoint. Stand on it and Enkaar, the Anointed will appear, along with a progress bar reading "Steady…" Once the bar is filled, The Last Word will appear on the plate with a "Draw!" prompt. Grab The Last Word and aim for the blaster Enkaar is holding in his right hand. When Enkaar's weapon starts to glow, shoot it with The Last Word. If you don't shoot in time, you will die, so be ready.

You'll need to face off with Enkaar three times on three different plates. To unlock the next plate, simply kill all the enemies in the area - there really aren't too many, but you have to kill all of them. The kicker is that an additional clone of Enkaar will appear on each new plate. His clones attack in the order they spawn, so start watching once you step on a plate. Make your way to the third plate, out-shoot all three of Enkaar's clones - again, aim right for the glowing tip of his blaster - and you'll get The Last Word for keepsies. Show it to the Drifter to finish the quest… then take it to the Crucible and put down some shotgun rushers.