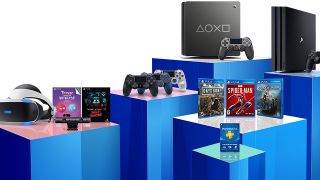 Days of Play console and deals

Sony is reviving its Days of Play promotion once again this year starting on June 7, a joyous time of year when the PlayStation brand takes time out of its busy schedule to celebrate, well, itself. But it's not all back patting and self-congratulation; Days of Play historically comes with a shiny new custom console emblazoned with the DualShock face button iconography and a raft of solid discounts on games and hardware.

This year is no exception. The custom console on offer is a Steel Black PS4 with the triangle, circle, cross, and square in muted gunmetal grey, a slick looking unit available for $299.99 (there's also the usual jet black PS4 Pro on offer for $349.99). This year's game sale includes a greatest hits list of recent exclusives, including Spider-Man and God of War for $19.99, and some Game of the Year contenders from the back catalog by way of the PlayStation Hits program - stuff like Last of Us Remastered or Bloodborne for $9.99. If you missed these games at launch, it's an amazing chance to get caught up for a fraction of the price. On the hardware side, Sony is also offering some PlayStation VR bundles including the headset and games for $249.99, or DualShocks for $39.99.

PlayStation 4 Slim Days of Play 2018 Console for $299.99 at Target
Can't wait for this year's custom PS4? Or perhaps you just prefer the stylish gold and blue of the 2018 offering? While they're limited edition and discontinued, you can still grab one at Target while supplies last. View Deal

Coming as it does near the end of the current hardware cycle, this feels like Sony celebrating the entire generation. You'd expect some jubilation, with reported console sales on the PlayStation side reportedly more than doubling the competitors across the aisle at Microsoft (shouts to VGchartz) and with easily some of the best exclusives, in greater volumes, of this generation. With new PS5 hardware on the horizon, taking a minute to toast the company's success isn't just an excuse for a mid-summer sale, it's also good business, a reminder of Sony's dominance in this round of console warfare just as it's prepping to sell another platform. The sale will run from June 7-17.

For more consoles, check out all the latest PS4 Pro deals, and if you need to renew your sub, here are today's best PS Plus deals.