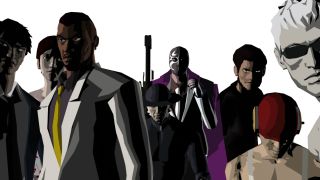 Happy Monday to you, our discerning reader. You've come to the right place for the pick of today's news, all delivered in classy, tasting plate sized portions.

At a "Hoppers" event in Japan Grasshopper Manufacture promised it would remaster its cool kid classic, Killer 7. Japanese blogger and tweeter @steelballrunner shared the news, but added there was no date on the project. The studio will also give its other classic, Flower, Sun, and Rain, the same remaster treatment. Start praying at your Harman Smith shrines now.

Sea of Thieves has the best day one "patch" ever

If you check out the General Clothing Store in Sea of Thieves you'll notice Rare has finally found a way to make gamers pleased to see a day one patch. They've made an actual eye patch, with a cheeky one plastered on it. It'll only be around until March 29, so scoot!

How's this for a take on day one patches? Visit any clothing store in #SeaOfThieves before March 29th to pick up the “Day 1 Eye-Patch” for just 1 gold! https://t.co/HVSXZQaR5g pic.twitter.com/jxCjdeWdH9March 19, 2018

The Incredibles 2 will arrive in your local popcorn emporiums on June 15, but the merch machine is already in motion. The Lego Juniors Incredibles 2 sets have popped up in Walmart, complete with an image promoting a Lego The Incredibles game for PS4, Xbox One, PC and Nintendo Switch. Check it out here.

Haha. What even. I checked, definitely not intentional. I passed it along to the team. Hilarious timing for this bug to appear.March 17, 2018

The sweet sounds of Katamari Damacy

The exquisite merchandise magicians at Mondo have just announced a Katamari Damacy Original Video Game Soundtrack LP. It's a limited run of 3000 copies on two 180 gram colored vinyl discs, and goes on sale on Wednesday.

Paragon may be dead, but you have Epic's blessing to rob its grave for your own use

Check out this exclusive trailer for 9 Monkeys of Shaolin, a kung fu brawler with serious '70s vibes