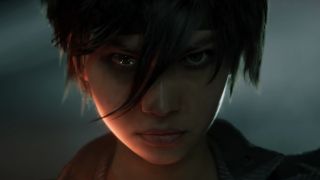 Beyond Good & Evil 2 is pretty simple on paper: it's an online space-pirate adventure where some of said pirates are anthropomorphic animals (aka furries), and you can explore an entire solar system. In practice, it's so much more: it's a sequel (well, kind of... more on that later) to a cult favorite game from 2003 that's been in development for more than a decade, with shifting visions and scope, a solar system-sized sandbox for you to explore as you seamlessly transition from on-foot traversal to spaceship hyperspeeds. Oh, and some of the content in the game will be made by fans via a collaboration with hitRECord, a collaborative platform spearheaded by Joseph Gordon-Levitt.

Want to know more? We thought you might. That's why we've compiled everything you need to know about Beyond Good & Evil 2 below.

Via a partnership with online collaboration platform hitRECord, Ubisoft plans to allow fans of Beyond Good & Evil to contribute to the lofty sequel. Creators can submit scripts, artwork, voiceover recordings, and more, then combine and mix their submissions with other creators to form a complete product which can be selected by the BG&E2 dev team to be part of the game.

Selected contributors will be paid for their work (at an unspecified rate) and there are already thousands of mixes and submissions on the hitRECord Beyond Good & Evil 2 community page.

The Beyond Good & Evil 2 cast includes Jade and Pey'j

Although it feels like we've known about Beyond Good & Evil 2 for a while, but until now it's not been clear whether our old heroes are making a comeback or not. Well, as part of the Ubisoft E3 2018 press conference, it turns out both Pey'j and Jade are back, but Jade isn't quite the girl we used to know. At one point she's deemed to be the "nemesis" and, wielding a katana, she rushes at Pey'j with rage in her eyes.

It's not clear exactly what role she'll play as yet, but it definitely looks intriguing.

The Beyond Good & Evil 2 release date is still TBA

Unfortunately, Beyond Good & Evil 2 is so early in development that it doesn't even have confirmed platforms, let alone a release window. That said, we already know that BG&E 2 is among Ubisoft's E3 2018 games, so come mid-June, perhaps the French publisher will at least give us a year in which we can expect this highly-anticipated title.

We don't have a release date just yet, but we do know when we'll be able to at least play Beyond Good & Evil 2 for the first time. Creator Michael Ancel said a playable beta is planned for late 2019. Here's hoping the full game follows in 2020.

The Beyond Good & Evil 2 reveal stretched out across years

In late 2016, Beyond Good & Evil director Michel Ancel shared an image on Instagram that seemed to be teasing Beyond Good & Evil 2. The picture showed a mechanic, with a young anthropomorphic pig on his shoulders. The caption read, "Somewhere in system 4 ...  - Thanks #ubisoft for making this possible!" Many took this to mean that the imagery was depicting a young Pey'j, but this was never explicitly stated. Still, it's a striking visual that got plenty talking.

Shortly thereafter, Ancel posted another image - this one of a humanoid shark, all but confirming that Beyond Good and Evil 2 (or whatever it would end up being called) was in development. Finally, as part of E3 2017, Ubisoft made a formal announcement of Beyond Good & Evil 2 by debuting a cinematic trailer and bringing Ancel onstage to talk about his vision for the game. BG&E 2 was finally official.

Beyond Good & Evil 2 is an online sandbox experience. Players will create a custom character (either human or hybrid) that starts at the bottom of the socio-economic ladder, and must work their way up to being captain of a ship capable of interplanetary travel. You'll be able to connect with friends or explore the stars solo.

An early prototype build shows a seamless transition from person-scale exploration to atmosphere-breaching space travel. It's obviously a very early work-in-progress, but the basic building blocks of an open-galaxy game (which would surely be the next step up from open-world, right?) are there.

Beyond Good & Evil 2 has NPC recruitment

As you climb the space pirate ladder, you'll need to expand your crew in kind. Many NPCs can be recruited to your side - not unlike the private armies seen in Metal Gear Solid 5 - and will provide bonuses back home on your mothership. Different NPCs have different talents, and you'll need to build a diverse and capable crew to man your ship.

Beyond Good & Evil 2's story is a prequel, and has a different tone

Beyond Good & Evil 2 director Michel Ancel describes System 3 (the star system where the game will take place) as something quite different from the first game. Whereas the original BG&E told a tale of heroism and government conspiracy, this game will be a space pirate tale, set during the rise of human-animal hybrids. When Beyond Good & Evil 2 starts, many hybrids are still being used and sold as slaves.

This means that Beyond Good & Evil 2 takes place before the original game, and in a totally separate solar system. So expect some visual and audio cues to help show this is the same universe, but probably not familiar faces.

The original Beyond Good & Evil is one of the best games you've never played. The Ubisoft-developed adventure is a Zelda-like RPG with a massive open-world (at least by 2003 standards), starring Jade, a photojournalist who takes care of orphans and knows martial arts. Did I mention this all takes place on an alien world with anthropomorphic animals - including Jade's "uncle," a pig named Pey'j? It was an instant cult hit, though commercial disappointment put plans for more games in the series on hold.

In 2008, Ubisoft unveiled to the world a trailer for Beyond Good & Evil 2. Only... not really. Possibly as part of an effort to not make promises it couldn't keep, Ubisoft wouldn't acknowledge the game as "Beyond Good & Evil 2”, nor that the characters seen were in fact Jade and Pey'j. Even though, come on, just look at it!

The following year, a gameplay prototype was leaked and began circulating around the web. This time, we saw what appeared to be heroine Jade running through a city (bustling with far more pedestrian and vehicle traffic than the first game), parkouring her way through buildings and up rooftops as people in armor shot at her. Imagine Uncharted, but a bit more agile. Or don't imagine it, and take a look for yourself:

Ubisoft gave a vague acknowledgment that Beyond Good & Evil 2 was being worked on, but again would not confirm that's what we were seeing here. This mixture of denial and non-committal responses was the way things would stay until 2016, when we first got an idea of what direction the game would actually take thanks to the aforementioned Instagram art posts.

During one of the first livestreams of the "Space Monkey Program" (a nickname given to a segment of the Beyond Good & Evil 2 fan community that offers feedback in exchange for an early look at the game), narrative designer Gabrielle Shrager explained that players will acquire a pirate crew, and that certain NPCs will become your traveling companions. These characters are said to have fleshed-out backstories and motivations, and should feel more like a BioWare-style party member than random NPC #47.

The concept art also showed that, compared to the heavily-stylized designs of the first game, Beyond Good & Evil 2 will take a more realistic approach in its visuals.

The original BG&E featured characters of cartoonish proportions stomping or slinking through the story and environments. Beyond Good & Evil 2 might be a bit exaggerated, but it's clearly going for a more realistic look overall. If the initial trailer weren't enough evidence of that, Ancel and his team have released several images of concept art since the E3 2017 debut that show an overall grittier look to the galaxy and its inhabitants.