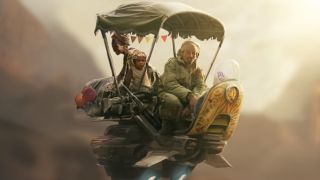 Look at all that cool stuff in the Beyond Good & Evil 2 reveal: a foul-mouthed monkey man, a cocky getaway driver, a massive spaceship full of friendly crewmates. Talk about living the sci-fi dream. And it will be just a dream when you actually start playing Beyond Good & Evil 2, as senior producer Guillaume Brunier revealed in a behind-the-scenes video from Ubisoft.

Before you get to live the glorious life of space pirate, you'll have to work your way up from the bottom. At least you'll play as your own custom character (via the Ubisoft blog), so you can live in squalor and irrelevance your way.

"You start the game at the very, very low end of the social scale as a pirate," Brunier explained. "And you have no crew, no ship, nothing. We might give you a small space tuk-tuk. But that's it [...] The idea of the game is that you're gonna live this life. That's going from nobody to a space legend."

As your career in the burgeoning field of space piracy takes, you'll recruit more folks to your crew and find better vehicles. That includes ships like the enormous flagship at the end of the trailer, which can comfortably seat your growing pirate family as well as your old space tuk-tuk. Once you have the means to leave the atmosphere, System 3 is your oyster.

"Being lost, that's what we like about traveling, and what we want the player to experience in the game," Brunier said. "That's the reason why we offer the player a huge universe with many different planets and many different cultures to go and meet.

"We've developed a breakthrough technology that allows us to go from a very, very narrow inside space in a big city up to going to another planet. We don't want an empty solar system, we want a universe full of life. Our game is about meeting others, traveling to other places."