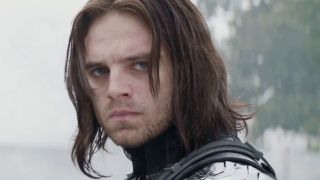 Things have never looked as dire for the Marvel Cinematic Universe as they do in Avengers: Infinity War. Ultimate bad guy Thanos and his goons are laying waste to the cosmos, and it's all anyone can do to try and stem the tide. One of the heroes standing in the path of this destruction is Bucky Barnes, aka the Winter Soldier. And according to actor Sebastian Stan, he's got quite the fight ahead of him.

Speaking to MTV News, Stan commented on the scope of his character's fight and compared it to a particularly fantastic moment from Game of Thrones season 6. "It certainly is the biggest culmination of anything and everything they’ve done so far," says Stan. "It’s just going to be bigger and crazier than anything. I feel a lot like that Jon Snow character [in] Battle of the Bastards. When there’s that shot of Jon Snow, from the back, as horses are charging at him and he’s just standing there - that’s kind of how I feel on set at times. Will I make this stampede or not?"

This, for reference, is the shot Stan is referring to, and yes, it is pretty intimidating:

Fans have speculated that Bucky could end up being like Jon in another way as well: a leader around which other characters will rally to support. We know Steve Rogers has strong feelings for his wartime friend (hell, that was kind of the whole point of Captain America: Civil War), and even T'Challa, aka Black Panther, seems pretty okay with the guy now.

Will Bucky survive the fight? Should he?

In the comics, Barnes took up the shield as Captain America for a time, eager to prove himself a capable hero. Mayhaps we'll see something similar when Avengers: Infinity War hits theaters in April 2018?