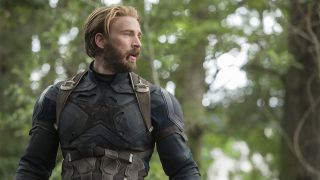 Out of everything we do (and definitely don’t) know about Avengers: Endgame, Chris Evans hanging up his shield and retiring from the role of Captain America is one of the near-certainties. Except co-director Joe Russo has thrown a sneaky spanner in the works by teasing that Steve Rogers may be back in some capacity during a recent interview. Who knows what to believe anymore?

Speaking to USA Today, the elder Russo brother mentions how finishing production on Avengers 4 and saying goodbye to Chris Evans was “more emotional for him than it was for us, mostly ‘cos he’s not done yet.”

Wait, what? He’s not done? Chris Evans has already taken to Twitter to say his goodbyes to Marvel fans but, in what could be one of the most majestic forms of trolling ever, the door is open for a Steve Rogers return, even if Joe Russo won’t go into detail about it.

“I don’t want to explain what I mean,” Russo teases, “But audiences will soon understand.” So, y’know, there’s a spoilertastic explanation as to why Chris Evans might still return as Captain America post-Avengers 4. My money’s on a second stint being frozen in ice.

He could just be referring to seeing the Captain America character again during the editing process, but that wouldn’t really make sense. It definitely wouldn’t chime with Joe Russo zipping his lips when it comes to revealing what exactly he means when he says Chris Evans isn’t done yet. Maybe it’ll all be explained in the Avengers: Endgame trailer?

I have a funny feeling that Marvel may be playing us all like a fiddle one way or the other but, one thing is for sure: nothing is for certain. Much like how time travel might not be in the movie after all, our Phase 3-ending expectations are slowly being crushed one by one – and that makes Avengers 4 more exciting than ever before.

Cap hasn't been confirmed for any of these new Marvel movies - but you never know at this point.