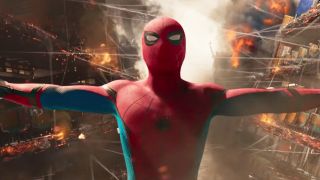 The new Spider-Man: Homecoming trailer has dropped - watch it here - and it is as amazing as its star. There's not a shot nor scene that doesn't have a 'wow' moment in it, so let's break it down and look at some of the best.

This is a longer version of the shot used to tease the trailer. We know the suit has come from Stark and he seems to have packed it with tricks. This tiny little flying drone appears to be fitted into the outfit's logo. It not clear if this is an interpretation of the comic books spider tracer, a homing device often used by Parker.

Shrink to fit? What can't it do?

He just loves being Spider-Man and doesn't care who knows it.

"Can I try the suit on?" is not a question you hear often in superhero movies. And you certainly don't see other people trying on the duds. Peter's school friend Ned, played by Jacob Batalon, certainly looks like a grounding influence here; constantly questioning Peter on who he's met and what he's done as Spider-Man.

That's exactly how a teenager with gymnastic super powers should fight. Also, is that some sort of spider grenade at the end?

What looks like an encounter with the Vulture ends up with this boat split in half and Spidey trying to put it back together. Something he only does with Iron Man's help. The relationship between the two is clearly a big part of the film and this moment leads to confrontation between the two.

"I'm nothing without the suit"

One of the hardest hitting moments of the trailer isn't a fight, it's this exchange between Parker and Stark. Clearly unimpressed by Spider-Man's recklessness risking lives on the boat, Tony demands the suit back.

"I'm nothing without the suit," cries Peter. Stark answers: "If you're nothing without this suit, then you shouldn't have it." That's quite a bitter pill to swallow. We might not hear the "with great power comes great responsibility" line in this movie (Uncle Ben died prior to these events), but it's clear that it's a lesson being learned.

The fight scenes look like they're going to be SO GOOD

All of the yes.