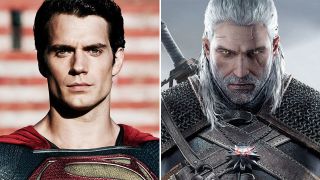 The Witcher Netflix series has its Witcher. The company announced today that Henry Cavill, of Superman and Mission Impossible: Fallout fame, will lead the series as main protagonist Geralt of Rivia. According to the press release from Netflix, Cavill is a big fan of the original Witcher stories, which inspired the way-more-famous-outside-of-Poland game series. No word on whether he's also experienced the joys of The Witcher 3's horse glitches firsthand, but Cavill is on record as being a lover of games (especially single-player RPGs) so I wouldn't bet against it.

For a little bit of insight into just what kind of Witcher story we're talking about here, let's take a look at the new official synopsis: "Based on the best-selling fantasy series, The Witcher is an epic tale of fate and family. Geralt of Rivia, a solitary monster hunter, struggles to find his place in a world where people often prove more wicked than beasts. But when destiny hurtles him toward a powerful sorceress, and a young princess with a dangerous secret, the three must learn to navigate the increasingly volatile Continent together."

The powerful sorceress and young princess are Yennefer and Ciri, respectively, whose casting remains a mystery for now. Given Cavill's clean-cut Superman image, series fans may wonder if he's really cut out to to play the rough, cynical, yet surprisingly noble Geralt. I have my doubts too. But Cavill's already demonstrated acting prowess in several of the White Wolf's favorite pastimes, so maybe it will work out? Here, let me demonstrate.

Geralt was big into bare-knuckle boxing for a while (by which I mean all of The Witcher 2). And Cavill enjoys it so much that his pre-brawl fist reloading from Mission Impossible: Fallout became a meme for like a whole month. At least in this respect, the two are a match made in heaven.

Geralt needs to be a ladies’ man

Thankfully, he’s shown he has kissy-kissy chops, playing the role of Randy who pursues a married woman (and eventually gets the girl) in 2009’s Whatever Works. Geralt of Rivia, too, has experience of hot-footing it out of bedrooms from Novigrad and beyond – and Henry Cavill’s acting resume already has that covered.

Talking to people while riding a horse

I don't know about the books, but roughly half of The Witcher 3's expository dialogue occurs on or near a horse. Fortunately, Cavill has already demonstrated a remarkable capability for horseback walk-and-talks in his role as Charles Brandon in The Tudors.

Henry Cavill knows his way around a sword

Geralt’s got not one but two swords (one for monsters, one for man, natch), which means that Henry Cavill’s fisticuffs can only get him so far. But, of course, he’s shown he has the skills for that also. Is there anything this man can’t do?

Cavill played Theseus in Immortals and, would you look at that, he’s doing all sorts of tricks with a sword. Show-off. But, still, it’s yet more reason to believe that he’s going to be the complete package in the Witcher Netflix series – and I can’t wait for him to go toe-to-toe with some miserly monsters and decapitate some bog-ridden beasts. The Witcher is filled with werewolves, witches, and other ne'er-do-wells that all need to be on the receiving end of the pointy bit of a sword. Go get ‘em, Henry.

Looking better if you just leave the facial hair on

This one pretty much speaks for itself.

For more to watch while you wait for The Witcher TV show, check out the best shows on Netflix right now.