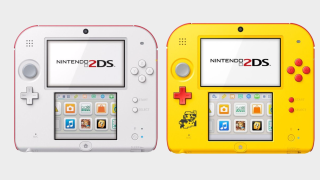 If you're looking for a great gift for the little tyke in your life, these Nintendo 2DS deals at Walmart are absolutely perfect, and one of the best Cyber Monday game deals we've seen yet. The 2DS is designed for children to enjoy, with bright colors, easy-to-use buttons, and a somewhat durable build. They're a great gift for a kid who wants to get into handheld gaming this holiday season, but perhaps isn't ready for the heavier, larger Nintendo Switch (even I have trouble holding that thing sometimes).

The available bundles at Walmart let you choose between one of two Super Mario games: Super Mario Bros. 2, which comes with the light grey and red Nintendo 2DS, and Super Mario Maker, which comes pre-loaded onto a bright yellow 2DS that your child couldn't lose if they tried (don't hold me to that). Despite Walmart's listing that says the grey 2DS bundle retails for just under $80, other retailers sell it for closer to $90, so you're getting a great deal no matter which way you look at it.

Nintendo 2DS New Super Mario Bros. 2 Bundle (Grey) | $69.99 at Walmart (save $21)
This set is available at other retailers for just over $90. Jump on this deal, which includes a classic Super Mario Bros. game, fast.View Deal

The 2DS is the 2D version of the 3DS, designed for a younger gamer or for those not bothered by the prospect of 2D visuals - but you'll be able to play any 3DS games on it, so don't fret. It's built to be more durable than other handheld devices and can play cartridges or download games.

Super Mario Maker lets you build and play through side-scrolling Super Mario courses - it's the perfect game for a growing mind as it promotes creativity and problem solving. It comes with the yellow 2DS. Super Mario Bros. 2, which comes with the grey 2DS, is a port of the 1988 game of the same name, and it's more of a traditional Mario game.

Again, these are great gifts for the young gamer in your life, and coupled with these great titles are an absolute steal. Don't worry, if you're looking for Cyber Monday Nintendo Switch deals, we've got those too.