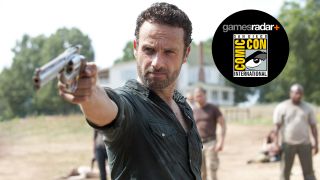 After that season finale, The Walking Dead is an even bigger deal than usual at this year's San Diego Comic Con. I was lucky enough to go to the season 7 press conference with the cast and while they wouldn't tell us who met the bat-end of Lucille (shock, horror!), I asked whether Andrew Lincoln thought the show could survive without it's main character Rick Grimes.

"Absolutely, I think that was always the intention." Andrew told me. "I mean, I’m speaking on behalf of Robert Kirkman, but it was sold to me by my agent that it was seen through the eyes of Rick and then it would turn into an ensemble. They lied. And I coined the phrase ‘a one-semble’."

The Walking Dead showrunners have always made it clear that no one is safe so could Rick be the one who gets beaten to death in the season 7 premiere? Probably not, but Andrew thinks that if that was the case there'd be someone to step into the shoes of the main man. "Fortunately, we have a new guy on the block. My wife is very happy because he gets all the lines and I get a bit of time off. So, yeah, welcome to the Negan show."

The Walking Dead season 7 will debut on AMC in October 2016.