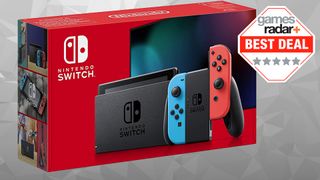 We've found two of the best secret Nintendo Switch deals you'll get on Cyber Monday, and they're over at Best Buy right now. You can get the Nintendo Switch console for $299 on with Mario vs Rabbids and Starlink, which is... very good. That's a saving of $119 However, you can also build an amazing starter bundle and save over $100 this Cyber Monday, the best discount we've seen on the Nintendo Switch. Here's how you do it, and get a Switch with EVERYTHING you need for a mere $342.46.

First, go to this link to access the Nintendo Switch console itself. Now click on 'Build Bundle', which is the blue button on the right. This brings up a whole host of options, allowing you to customize what you buy. While you can choose to do it any way you want, we've been searching for Cyber Monday Nintendo Switch deals all weekend, and we know what items save you the most money here AND what the essential kit is for getting yourself started.

Once you've added the console to your bundle, choose an SD card. We suggest the 128GB official Sandisk card, which saves you a whopping $48. Now choose a game. The best deal is Mario vs Rabbids Kingdom Battle, which you get for $15, saving you a healthy $45. Now grab a case. The top one, the Insignia, which is available in a series of colors, is half price, so you get another $7.50-off right here.

Nintendo Switch + 128GB SD card + Mario vs Rabbids + case | $342.46 (save $100.50)
This is the best Nintendo Switch deal you'll find on Cyber Monday, and you can customize it if you need. Hurry, before Best Buy sells out, because everyone will want this.View Deal

Nintendo Switch + Mario vs Rabbids + Starlink | $299 (save $119)
If you want a pre-built bundle with Mario vs Rabbids and Starlink, just go straight here. You save $119, but don't get any choice over your games.View Deal

If these secret Nintendo Switch deals don't do it for you, or you're just looking for a different console altogether, then check out our main Cyber Monday game deals guide for more.