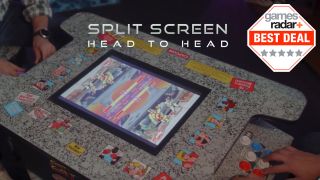 The world kinda sucks at the moment, so now is as good a time as any to reminisce with these cheap Arcade1Up arcade cabinets. Walmart has cut the price of a few big-name games like Street Fighter and Star Wars, and some are much more affordable than normal. For example, a 4-foot Space Invaders cabinet is $149.99 at the moment, saving you $150 overall. Meanwhile, the Street Fighter Head 2 Head Table is $399.99 instead of $500. It's still a weighty price tag, but we won't complain at something so cool being $100 cheaper than it should be.

Besides, Arcade1Up arcade cabinets boast good build quality, are officially licensed, and pack in a ton of nostalgic features. That Street Fighter table allows you to play opposite a friend, for instance. It includes 12 games to go with its authentic controls, too - six Street Fighter titles and half a dozen other classics such as 1989's Final Fight. Meanwhile, the Space Invaders cabinet stands 4 feet tall with original artwork and an authentic joystick and button setup. As for the Star Wars arcade machine (which has $50 off, bringing the cost down to $449), it features the same attention to detail albeit with a Riser that lifts its height. It also houses iconic adaptations of the original Star Wars trilogy.

Street Fighter Head 2 Head Table | $399.99 at Walmart (save $100)
This discounted Street Fighter table includes 12 games and the ability to play opposite a friend.View Deal

Space Invaders 4ft cabinet | $149.99 at Walmart (save $150)
This is the ultimate throwback, and getting $150 off via Walmart's deal brings it down to a much more appealing price.  View Deal

Star Wars cabinet with Riser | $449 at Walmart (save $50)
Revisit long ago and a galaxy far, far away with an offer on this classic recreation. It also has a Riser that makes it around 5 foot tall. View Deal

Want a hit of nostalgia without dropping hundreds of dollars? Don't worry, the best retro consoles are in your corner. The likes of the SEGA Genesis tend to go for about $70, bringing you back to the good old days at minimum cost.