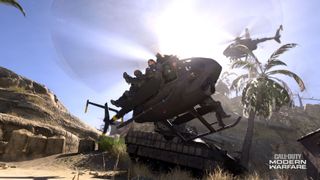 In spite of everything we've heard about Call of Duty: Modern Warfare so far, from beta dates to bloodthirsty Tamagotchis, developer Infinity Ward hasn't announced anything about a battle royale mode, which many were expecting given the popularity of Blackout in last year's Call of Duty: Black Ops 4.

There were rumours that one was in the works for the upcoming new game of 2019 earlier this year but, according to the latest comments from YouTuber LongSensation (who accurately leaked Modern Warfare's name before its official reveal), the game's battle royale mode will instead be coming as a standalone, free-to-play experience in early 2020.

So apparently Battle Royale in #ModernWarfare will be a free mode to release in early 2020. It will be downloadable as a separate game, but also will still be connected to the core game. If this is true then it's a very good move by Activision.August 7, 2019

Check out the new Call of Duty: Modern Warfare multiplayer Gunsmith system and plan your mods

To clarify; this rumour suggests the battle royale game will be set in the same universe as the upcoming Modern Warfare reboot, but not releasing as an update for the game itself, instead going free-to-play to bring in as any potential players as possible.

If true, this would mark a positive turn for publisher Activision, which previously locked access to Call of Duty: Modern Warfare Remastered as part of a special edition of 2016's Call of Duty: Infinite Warfare, and Treyarch has already held several free-to-play weekends for Blackout, which have likely brought on more full-time players in the long run.

Infinity Ward itself hasn't publicly ruled out battle royale for Modern Warfare, either, suggesting it could well be working on the mode in secret before an official announcement sometime after the game's release this October. We'll be sure to keep you updated on any more news, but if - and it's a big "if" - LongSensation's claims do prove themselves to be true, we could see the likes of Captain Price and Soap McTavish parachuting into Nuketown as early as Spring next year.

For more, check out the Call of Duty: Modern Warfare Gunsmith system for a look at the game's arsenal, or watch the video below for a guide to everything else out this week.