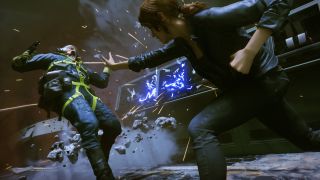 Remedy Entertainment, the Finnish studio behind beloved titles like Alan Wake and Control, has revealed more about its future plans in a new financial statement.

Most notably, the developer confirmed that it has two original new projects in the work. The first is an "unannounced game project" that the report states is "proceeding well", while the second, codenamed Vanguard, is about to enter pre-production, described as "a game that combines long-term service-based multiplayer experiences with some of Remedy’s unique game features".

"We created something exceptional": Remedy reflects on Control, our 2019 Game of the Year

In addition, Remedy also reiterated that was continuing to progress on the previously announced Control DLC for last year's critically acclaimed third-person shooter (both of which will release in 2020), alongside the singleplayer campaign for popular shooter Crossfire, which is launching on Xbox One later this year as a console exclusive.

Finally, the report also stated that Remedy is conducting "on-going work so that we are prepared for the next generation consoles arriving in 2020", referring to both the incoming arrival of both the PS5 and Xbox Series X in this year's holiday season.

If you're into the actual financial side of things, it's also worth mention that 2019 was a good year for Remedy Entertainment, with revenue 57% up from 2018. While that's, obviously, due to the fact that Remedy released a new, triple A title in 2019, it's reassuring to know that one of the industry's best studios isn't going anywhere, anytime soon.