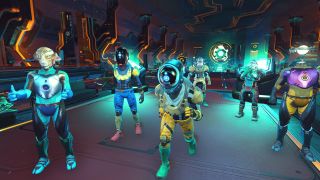 The highly-anticipated No Man's Sky Beyond update ran into some serious problems almost immediately after its launch. Players reported a litany of bugs including crashing consoles, inaccessible game saves, and unreachable storage containers.

As of late afternoon on August 15, Hello Games has issued one major patch (2.04) for consoles that addressed crashing problems, and two patches for PC (2.05 and 2.06). The 2.05 patch notes address the following issues:

The 2.06 patch notes address these problems:

According to Hello Games, the fixes in patches 2.05 and 2.06 will be rolled out to other platforms "as soon as possible," which isn't great news for console players looking forward to testing out the game's new social hub, the Space Anomaly.

No Man's Sky Beyond is available for PC, Xbox One, and PS4 (if you can get it work).