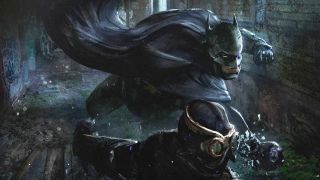 *Update*: Mendoza has since clarified in a comment to GamesRadar+ that he only took the concept art down to "adjust the lighting", going on to explain that "the images are just fanart [and] I am not affiliated with WB or WB Montreal." Sorry folks, turns out this theory was just that!

Now that Marvel's had its fun with Spider-Man PS4, DC fans are eagerly awaiting in the sidelines for the announcement of a new Batman game from Warner Bros. Interactive Entertainment. We know that Rocksteady, of Batman: Arkham series fame, has been working on something since Batman: Arkham Knight, but it's unclear whether its unnamed project is even planned for this generation of hardware.

Meanwhile, WB Montreal, another WBIE development studio most notable for giving us Batman: Arkham Origins, has been teasing a potential new Dark Knight game inspired by the character's Court of Owls comic book series. And now there's even more to go on, after digital artist Eddie Mendoza posted some explicit Court of Owls concept art (one of which can be seen above) on his online portfolio.

Mendoza himself claimed that he made the images, which show a heavily armoured Batman taking on Talon, the enigmatic leader of the titular Court of Owls cult, "just for fun", but it's what happened after he posted them - as chronicled by Reddit - that makes this affair slightly more curious.

Batman: Arkham studio finally confirms one thing about its next game: "It's not Superman"

Within 24 hours, Mendoza pulled the concept art from his page without any explanation as to why, and while he currently works for tech giant Apple, his ArtStation profile reveals the artist has been employed by Warner Bros. in the past.

Naturally, the internet is presuming this means that Mendoza's unofficial Court of Owls concept art was, at one point, officially commissioned for the game itself, and while he may no longer be working under the publisher, releasing the fruits of that labour online didn't get past Warner Bros., who may have kindly asked him to take down the images from his site to avoid spoiling an official reveal. Like I said, this is all still nothing more than a very elaborate theory right now, but certainly one that's not completely implausible.

We've reached out to both Mendoza and Warner Bros. Interactive Entertainment for comment on the situation to see if they can clarify the particulars, so keep an eye out on GamesRadar+ for any updates as they arrive. In the meantime, Mendoza's depictions of Batman are worth appreciating in and of themselves, if only as a taste for what we might expect from the caped crusader in the near future.

With or without Batman, here's all the big new games of 2019 that we know about so far.