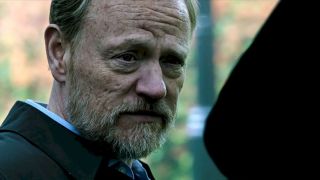 With the Morbius trailer more or less confirming the vampire movie’s existence as part of the MCU, all sorts of theories have become fair game. One of them revolves around the formation of the Sinister Six, a supervillain group that can count Vulture and Scorpion (already both introduced in Spider-Man: Homecoming), as well as the nefarious Doctor Octopus among its members. One of Morbius’ actors, though, has moved to deny any suggestion that he’s secretly playing Doc Ock.

So, those hoping for a stealth Sinister Six formation in Morbius can hold fire for the moment. The tentacled tyrant supposedly isn’t showing up. That’s not to say Harris isn’t playing someone who is up to no good, though.

His brief trailer appearance shows his unnamed character – in a white lab coat, hence some of the rumours – leading a younger Michael Morbius through to what looks like a hospital. It’s unclear at this stage exactly what kind of experiments go on there but Harris, who has previous as an iconic villain, playing Professor Moriarty in Sherlock Holmes: A Game of Shadows, is certainly a contender for playing a part in a third-act twist. He seems nice. Too nice.

Harris, meanwhile, is keeping further details about who he’s playing under wraps – for now. Maybe stick around for the inevitable post-credits scene. Just in case.

From Spider-Verse to Far From Home, here are the best Spider-Man movies, ranked!