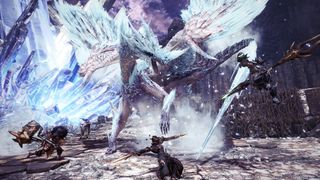 On the back of an exhaustive dev diary and a flashy trailer which collectively revealed 10 unmissable details, today Capcom announced one last pre-launch wave of Monster Hunter World: Iceborne betas. PS4 players who played the previous beta will get to hunt a new monster this time around - the icy new Elder Dragon Velkhana - and for the first time, Xbox One players will also get to participate. Here's everything you need to know about the upcoming Monster Hunter World: Iceborne betas.

What are the Monster Hunter World: Iceborne beta dates and times?

How to download and preload the Monster Hunter World: Iceborne beta

All players can download and preload the beta starting Wednesday, August 28.

Do you have what it takes to slay the mythical Elder Dragon Velkhana? Take on this frosty challenge in the #Iceborne Beta for PS4 and Xbox One:❄️ PlayStation 4: Aug 30 ~ Sep 1❄️ Xbox One: Sep 2 ~ Sep 5 pic.twitter.com/KUrtZM3aTuAugust 26, 2019

This beta will feature the same three hunts from last time - Great Jagras, Banbaro, and Tigrex - plus Velkhana. It will also incorporate features and feedback not present in the previous beta, including new weapon actions, the photo mode-esque View Mode, Gunlance changes, and expanded Slinger functionality.

For each different monster you successfully hunt in the beta, you'll receive an item pack in the main game once Iceborne's out. Capcom didn't explain exactly what's in each pack, but the beta trailer suggests the Velkhana pack contains a Gold Ticket you can exchange for a gem at the Melder, which is pretty tantalizing. You'll also receive various goods like potions, Slinger ammo, and Bowgun ammo for downing Great Jagrax, Banbaro, and Tigrex.

The full Monster Hunter World: Iceborne expansion will launch on PS4 and Xbox One on September 6, and on PC in January 2020.