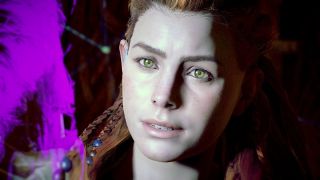 With the recent rumours about Horizon Zero Dawn coming to PC, you might be thinking about how to get your hands on the crossover armor set for it in Monster Hunter World. While there aren’t any robotic dinosaurs in Monster Hunter World, you can live out your dreams of being Aloy in other worlds by taking on some PS4 exclusive quests. Just keep in mind that these events only pop up every so often, so you’ll need to keep an eye out for them.

First, the good news. The Aloy armour-set, as well as being a brilliant-looking bit of kit, is also a pretty solid get-up in terms of functionality. Packing a raft of decent Armor Skill perks focused on boosting and conserving stamina, and also increasing critical hit chances with situational buffs to Affinity, it provides a good, pre-made set of bonuses for Hunters with a penchant for kinetic, hard-hitting play.

The bad news? You’re going to have to kill a heck of a lot of Anjanaths to get it. Okay, so six, but when we’re talking about Anjanaths, that’s more than enough. To get going, you’ll need to have hit High Rank (reaching at least Hunter Rank 11), and then you’ll need to go to Astera and check out the Quest Board. There, you should find a new, six-star quest – listed under Events – called The Proving. Sign up for this, and you’ll be tasked with taking down a special, tougher than usual Anj. Tougher than usual even for High Rank. Told you six was enough. You’re going to want to bring a team with you for this one.

As a completion reward, you’ll get a Nora Brave Trophy, among the usual Anjanath crafting materials and bonus items. You’ll need four of these in order to forge the Horizon armour (named Aloy Alpha in the Smithy), as well as two more if you want Aloy’s bow. Which you almost definitely do. So yeah, you’re looking at a bit of a grind. It’s worth just digging in and committing though, as it’s a mighty cool armour-set to have, not to mention a surprisingly good one, for a crossover game promotion. Also, The Proving is a limited-time event, currently slated to run until March 15.

Looking for more tips to give you a monster hunting edge? Check out our complete Monster Hunter World guide, which includes tips and walkthroughs for whatever stage of the game you’re at.